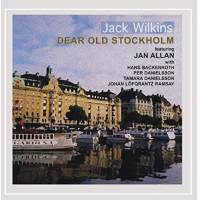 This agreeable studio date, inspired by tenor saxophonist Jack Wilkins' experiences while visiting Sweden, was recorded in Stockholm with a group of splendid Swedish musicians, two of whom—pianist Per Danielsson and his wife, alto saxophonist Tamara—are fellow teachers with Wilkins at the University of South Florida in Tampa. To bolster the front line, Wilkins chose one of Sweden's finest, trumpeter Jan Allan, and enlisted bassist Hans Backenroth and drummer Johan Lofqrantz Ramsay to round out the rhythm section.

While a few of the songs have Swedish names, the music itself is emphatically American post-bop, and the group is at its harmonious best on the snappy groovers ("Dear Old Stockholm," Dexter Gordon's "Fried Bananas," Charlie Shavers' "Swedish Schnapps"). That's not to say that anything else is less than pleasing, from Georg Reidel's "Idas Sommarvisa" to Horace Silver's "Strollin'." The lone standard, Jerome Kern's "Long Ago and Far Away," hurries briskly along behind elaborate interplay by Wilkins and Allan, while Blue Mitchell's boppish "Blue Silver" proves another inspired choice. Per Danielsson wrote "Morning Shine," Wilkins arranged the traditional Swedish theme "Emigrant Visa," and Chuck Owen, another member of the USF faculty, composed "A Phares of the Heart."

Solo-wise, everyone leaves a favorable impression, with Wilkins' bright, supple tenor showing the way, followed closely by Allan's Tom Harrell-like trumpet and Tamara Danielsson's expressive alto. Per Danielsson doesn't solo often but makes the most of each opportunity with sharp and lyrical ad libs. Meanwhile, Backenroth and Ramsay lay down a solid bedrock while keeping everyone snug and in sync.

The sound is quite good and the playing time is respectable at just under fifty-five minutes. A likeable, well-planned session that may be devoid of "names" (unless one counts Allan, who's well-known in Sweden) but overcomes that handicap by emphasizing the group dynamic.