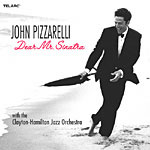 Whether they know it or not, performers pay tribute to the Master Storyteller every time they interpret and resuscitate one of the thousands of songs from the so-called "Great American Songbook"—a repository of the best songs written between 1920 and 1960 by Berlin, Kern, Porter, Gershwin, Rodgers & Hart, Arlen, Van Heusen, Styne and company—and all owing their continuing influence and vitality more to one performer than any other.

So, as with any other recorded Frank Sinatra tribute, the question is inescapable: What does it mean exactly? To a "Sinatraphile, perhaps it's the exemplary singing—from the quality of the vocal instrument, to the nuanced interpretation of demanding texts, to the virtuoso elocution of material ranging from angst- ridden art songs about aging and death ("suicide songs," he called them) to the full-blown quasi-operatic drama of the Hammerstein material. Or maybe it's the hip readings of the Cole Porter songs, with their extroverted expressions of love's deceptions and a lover's obsessions. Or a fitting tribute album might be one emulating the integrity of the organically whole "concept albums," collections conceived by Sinatra and Nelson Riddle as integrated suites, or thematically linked, carefully sequenced tone poems. Or to a few cynics, it could be seen as exploitive.

Giving Pizzarelli the benefit of the doubt, his effort might be seen primarily as confirming his good taste in choice of repertory not to mention his commitment to swinging and soulful readings of the standards. Like his earlier nod to Brazilian music, it's pleasant enough, and might be even more so without the explicit reminder of a Sinatra connection (unfortunately Old Blue's/Riddle's version of "You Make Me Feel So Young" preceded Pizzarelli's in my CD deck). "If I Had You," on the other hand, goes down smooth as silk, because it's not so exclusively linked with Sinatra (moreover, the definitive Sinatra version, a Robert Farnon arrangement recorded in Great Britain, was not even released in the States until 25 years or more after the original recording). But with the singularly successful musical ménage à trois realized by Sinatra-Riddle- Porter on "I've Got You Under My Skin" still resonating in a listener's consciousness, the dedication once again becomes gratuitous and not a little distracting.

I'd like to say that Pizzarelli's talent as a guitarist makes up the difference, but that would be disingenuous and misleading. Sinatra's voice and bel canto style were the product of years of training (including classical techniques and breathing exercises). The careful study he made of performers such as Mabel Mercer, Billie Holiday and Tommy Dorsey helped complete the picture. Finally, the careers catalogued in a minor Sinatra hit, "That's Life," practically represent the life experiences that prepared him to play any role that a song might call for—from the most invincible to the most vulnerable while never leaving a doubt that he meant every word—the singer as consummate method actor, making it impossible to distinguish between art and life, performance and performer, persona and person.

John Clayton's arrangements may not yet measure up to Riddle's or Johnny Mandell's, but his emergence over the past twenty years as one of the best in the business is further support of Pizzarelli's good musical instincts. Still it should be possible to reflect the light of the mother lode strictly through the music. In fact, what better tribute than a party for which the invoked guest-of-honor requires no identification?

Track Listing: Ring-A-Ding Ding; You Make Me Feel So Young; How About You?; If I Had You; Witchcraft; I