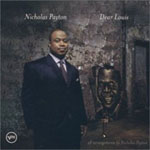 The problem with tribute albums is that if you present a slavish recreation of an artist's style, you'll be criticized and if you try to put "old wine in new bottles," critics will say you're not being true to the spirit of the originals. Classic catch-22, right?

Regardless, for his tribute to legendary, fellow New Orleans hornman Louis Armstrong, Nicholas Payton has chosen the later approach. Indeed, Payton's sprawling arrangements for his eleven-piece big band have little in common with Armstrong's landmark recordings. Payton turns "Hello, Dolly" into a bossa nova, and puts a modern, almost bop spin, on classics like "Potato Head Blues" and "West End Blues." The trumpeter flexes his vocal chords on "I'll Never Be The Same" and again with "I'll Be Glad When You're Dead," while special guest vocalist Dianne Reeves is fine on "Sunny Side Of The Street" and Dr. John croons "Mack The Knife."

In spite of his newfound vocal prowess (he's not a bad singer), it's Payton's trumpet work on Dear Louis that's most impressive. Clear, clean and confidently assured—Pops would surely approve.

Potato Head Blues, Hello, Dolly, I'll Be Glad When You're Dead (You Rascal You), Tight Like This, Interlude, On the Sunny Side of the Street, Dear Louis, Blues in the Night, The Peanut Vendor, Mack the Knife, Tiger Rag, I'll Never Be the Same, West End Blues.