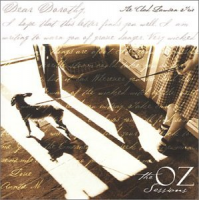 The future isn't always as bleak as it so often appears. Amid the welter of rubbish that passes for music these days one can occasionally discern a refreshing ray of sunshine. Here's one—music from MGM's film classic The Wizard of Oz, handsomely arranged and marvelously played by three talented young musicians from North Carolina. The idea for the album, says leader / pianist Chad Lawson, came to him while visiting a friend's house whose daughter was watching the film on television. 'I honestly [hadn't] realized how much music was contained in [the film],' he recalls. 'I picked up the soundtrack, noticed how many songs were listed, and it was . . . absolutely perfect.'

Lawson conveyed his enthusiasm to the others in his trio —bassist Zack Page, drummer Alfred Sergel—booked a studio and set about recording Dear Dorothy: The Oz Sessions. All the usual suspects are here —'Over the Rainbow,' 'Ding Dong the Witch Is Dead,' 'If I Only Had a Brain,' 'The Merry Old Land of Oz' and so on —with a few other pleasant surprises including two of Lawson's perceptive compositions, 'Dear Dorothy,' 'Are We There Yet?' and one number, 'The Jitterbug,' that was recorded and filmed but dropped before the movie opened. The plan, says Lawson was 'to 'try to tell the story without the visuals,'' something the trio does quite well. Of course, the story itself is so firmly embedded in the collective memory of most Americans, as is the wonderful score by Harold Arlen (music) and E.Y. 'Yip' Harburg (lyrics), that putting them together in the mind's eye is almost second nature.

What is most persuasive about the album is the way in which the trio has reinvigorated the music, in a sense repaving the 'yellow brick road' with bright arrangements and innovative rhythmic and harmonic variations. Imparting a fresh point of view to something as well-known and well-loved as The Wizard of Oz is a lot to ask of musicians as young and unseasoned as these, but the trio accomplishes the improbable, and The Oz Sessions are as radiant as Dorothy's ruby slippers and as enchanting as the storybook land for which they are named.

Track Listing: Over the Rainbow; Yellow Brick Road / Off to See the Wizard; If I Only Had a Brain; Ding Dong the Witch Is Dead; Munchkinland; The Lollypop Guild; The Merry Ole Land of Oz; King of the Forest; Dear Dorothy; The Jitterbug; Are We There Yet?; Optimistic Voices (56:29).