By HRAYR ATTARIAN
January 30, 2013
Sign in to view read count 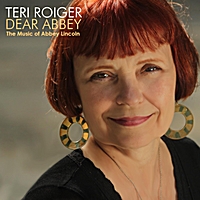 With Dear Abbey, singer Teri Roiger does something remarkable. She interprets thirteen of vocalist Abbey Lincoln's compositions, maintaining the legendary singer's emotive articulation and dramatic delivery, yet marking each song with her own individuality. She thus pays the ultimate homage to an innovator who blazed her own unique artistic path.

Roiger's warm contralto, like aged, fine whisky, is smooth but heady, as heard on her yearning interpretation of "Angel Face," a ballad colored with nocturnal shades. She delivers the mixture of melancholy and joy inherent in the classic "The World Is Falling Down" with a wistful wit as her bittersweet voice floats over the swells of pianist Frank Kimbrough's earthy tones.

Osby and Roiger engage in a sonic tango on the passionately dark "Throw It Away," a haunting and vivid feature for bassist John Menegon's lyrical and intriguing pizzicato. The bassist's relaxed and drifting string work is paired with drummer Steve Williams' reserved, percolating rumble on the iconic "You Gotta Pay The Band." The duo's undulating rhythms also form the framework over which Roiger's relaxed and rich vocals glide on the nostalgic and heartfelt "Not To Worry."

Roiger's timber and phrasing are well-suited for the blues, as she demonstrates on the "Hey Lordy Mama (Blues For Mama)," her smoky growls simmering over guitarist Mark Dziuba's fervent tones.

An imaginative musician, Roiger has assembled a band of superlative talent on Dear Abbey: the Music of Abbey Lincoln. The result is an exquisite tribute to a virtuoso of originality who is both intellectually and emotionally satisfying.

Wholly Earth; The Music Is the Magic; I'm in Love; Hey Lordy Mama (Blues for Mama); Angel Face; The World Is Falling Down; Bird Alone; Not to Worry; When Love Was You and Me; Throw It Away; You Gotta Pay the Band; First Song; When I'm Called Home.