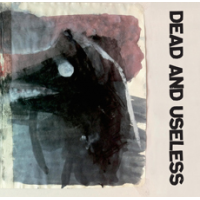 Nothing new, just better. Let me rephrase that, Dead And Useless is not a new recording by saxophonist Peter Brötzmann and drummer Peeter Uuskyla, it was taken from the 2006 Born Broke (Atavistic, 2008) session and was the second disc of a 2-CD set. It is, though, remastered here as a loving vinyl release (somewhere Mats Gustafsson is drooling) that is also available as a single CD with the artwork, as is now de rigueur, by the artist Peter Brötzmann.

And the collaboration between the Swedish drummer and German saxophonist is also nothing new. In trio with Danish bassist Peter Friis Nielsen, Brötzmann and Uuskyla have recorded four stellar improvised discs. Add Polish saxophonist Mikołaj Trzaska and you have The North Quartet. Connoisseurs of Brötzmann's music seem to flock to the two extremes, either his Chicago Tentet and his Octet (the one that produced Machine Gun (BRÖ, 1968)) or his solo and duo outings. The smaller lineups tend to showcase his genius, and in duo, he is either pushed or pulled in varied and most interesting directions. Recent duo collaborators have included vibraphonist Jason Adasiewicz, and drummers Steve Noble, Paal Nilssen-Love, Hamid Drake, Nasheet Waits, and Jörg Fischer.

Uuskyla's other notable collaborations have been with free jazz legends Cecil Taylor and Bengt Fredrik Nordström. While he can go toe-to-toe with Brötzmann, he is a colourist here, not a pugilist. The music is a conversation, a colloquy between discriminating artists. Opening with subdued horn and sticks on cymbal, the pair sift through a sound that simmers, yet rarely boils. Uuskyla persuades the saxophonist without provoking him. As with truly great drummers, he can do more with a downsized kit, say more with a flick of the wrist and a hesitant tom-tom roll than other busy players.

Throughout his career, Brötzmann's music has been mischaracterized as angry or violent. Perhaps recordings like this (and his solo releases) will cause a re-evaluation of his music. Brotzmann's sound is rooted in the European free jazz tradition, but also he is a keen observer of the American blues, jazz, and for lack of a better term, folk music. Within the nurturing patterns and structured framework provided by Uuskyla, the music blossoms from a private tête-à-tête into a public discourse.