By MICHAEL MCCAW
January 10, 2006
Sign in to view read count 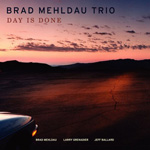 Seldom do musicians rise beyond their peers into a more rarefied air, transversing the ground between player and interpreter to influence standards and the direction where the next steps will go. Rarely, if ever, is this transition actually recorded. Nonetheless, one thing is easily identifiable with Day Is Done: Brad Mehldau has begun the transformation from musician of merit to icon.

Without doubt, there is an argument to be made on both sides—and to be sure the pianist himself could contribute pages worth—but after one has listened to and embraced Mehldau's version of Paul Simon's "Fifty Ways To Leave Your Lover, it's hard to deny that he's a leader and beacon of modern mainstream jazz piano. Wholly unified, even within a reconstituted trio consisting of longtime bassist Larry Grenadier and new partner Jeff Ballard on drums, Mehldau lifts the song from pop connotations to jazz standard in a definitive performance.

Opening with Grenadier's bass permutations of the melody before Mehldau and Ballard join in, the sound is sophisticated yet accessible. And while numerous bass solos may lose interest over time, Grenadier has no such problem, basing his work on melody and often finding it spurred on through Mehldau's interactive comping.

Many critics have already emphasized that Ballard, replacing longtime trio member Jorge Rossy, lends a different and more insistent feel to Mehldau's trio. And to an extent they are correct. However, what he really brings to the music is more fluid feel for time and space that pushes Mehldau with heightened urgency. While not necessarily better, this new feel seems more immediate and opens new possibilities from different angles. Ultimately this is what seems to have elevated Mehldau's game to new heights. His solos are more concise and deeper in construction, while still affecting on the most basic of levels, similar to the music of Bill Evans and his classic trio.

And like that trio, Mehldau and his compatriots do not present an album of heads, but rather songs. As always, with Day is Done, Mehldau comes across as a throwback in his means of choosing material and how he explores them by basing everything upon the song and extrapolating kernels of ideas from there.

And with Mehldau's continual inclusion of material from Radiohead, Nick Drake, Paul Simon, and others, this material comes off less and less as forcing new standards than simply placing them side by side a la Cole Porter, and treating them with the same respect and playfulness. In the end, Day Is Done is a magnificent record. It may garner a three star review here and there, but make no mistake: that's a severe under-rating, even within the pianist's own catalog.

And when you hear Mehldau coming loose into a solo interlude during "Fifty Ways, stamping the song with his own brand before segueing back into the fold, chances are you will agree.

Knives Out; Alfie; Martha My Dear; Day is Done; Artis; Turtle Town; She'e Leaving Home; Granada; 50 Ways to Leave Your Lover; No Moon at All.