Mings And Craig: Day By Day

By ROB ROSENBLUM
January 16, 2017
Sign in to view read count 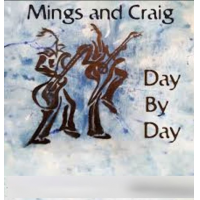 Day By Day by the group Mings and Craig consisting of guitarists Monty Craig and Jim Mings is a quiet and unassuming guitar CD by two good friends and respected musicians from the north western part of South Carolina area near Greenville.

Both musicians are educators and long time friends. Craig teaches at Clemson University. Mings moved from Austin, Texas to Columbia, attending the University of South Carolina. Their group is called Mings and Craig and they perform mostly in and around the Columbia and Greenville area.

There is nothing dramatic or earth shattering about this album. Neither artists are showy in the way many people expect guitarists to be. While both acoustic and electric guitars are used, it has that Charlie Byrd acoustic feel to it.

Most of the interplay is one guitarist providing a soft chordal cushion for the soloist. All the songs are either slow or medium tempo. Having played together for almost thirty years, they have appeared to have been major influences on each other. While those familiar with them may be able to tell them apart, they are quite similar stylistically. The producers do not indicate which guitarist is on which speaker, so we are left to guess who is playing what solo.

It would be quite easy to dismiss the music as simply mood music. But behind the very gentle and unassuming exterior there is some very thoughtful playing.

The first of two versions of "Nature Boy" has some nice intermingling of solo lines. "Angel Eyes" is appropriately somber. "Jim's Swing" is the most upbeat of the songs and has a tinge of old time swing. They finish with a few four bar trades and then a solo that is made up largely of common swing riffs before fading out at the end.

They have made a delightful selection of ballads. Most of them are quite familiar, but are quality songs that are full of inspiration and offer a great deal of improvisational opportunities to jazz musicians.

When many people think of guitars, they conjure up images of John McLaughlin and Al Di Meola. Mings and Craig offer a counter proposal. Playing very much in the understated Jim Hall style of jazz guitar, they have produced a sensitive and pleasant product, more in keeping with a glass of wine and candlelight than a pitcher of beer and a room full of boisterous laughter.

About Mings And Craig