By NENAD GEORGIEVSKI
February 8, 2014
Sign in to view read count 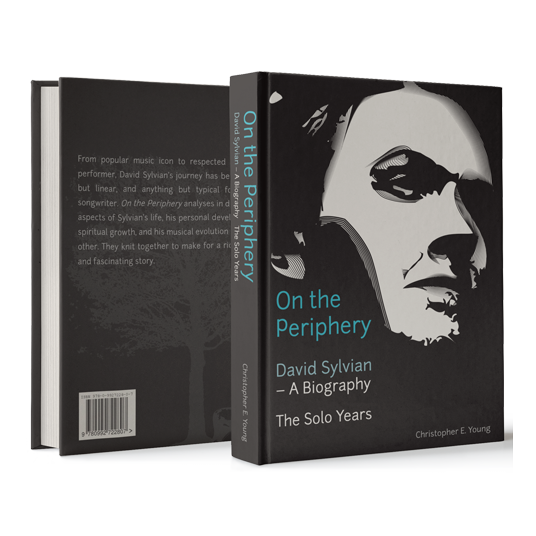 With his songs of spiritual and emotional quest, and unspeakable yearning, singer and composer David Sylvian really occupies his own musical cosmos. Often viewed as the quiet man of popular music who through hushed stillness and subtle, delicate and sometimes disturbing sounds, has created a body of work which provided an important bridge between different genres, eras and types of artists. As an artist, Sylvian has a shadow that has stretched across 30 years of music history, his immaculately written lyrics have provided inspiration for a number of artists. A restless soul and a poet, he became one of the most shape-shifting artists in contemporary music, ever searching and never resting on his laurels. All of that is marked by his deep,erogenous and penumbral voice which every time it thunders and resonates it serves as a wonderful reminder of the immortality of a good song.

In taking on the task of writing about David Sylvian's biography, journalist Christopher E. Young has collided with the difficulty of telling a story of an enigmatic story teller whose whole career has been marked with a distance between his audiences and his personal life. His book showcases that it is no easy task to write about a writer whose work is so language specific and simultaneously intimate and distant, an artist who very similarly to poet Leonard Cohen has set out on an inner pilgrimage and spiritual quest, which can be gleaned and traced through his music and lyrics.

The demise of his band Japan in 1982 has led him on a more adventurous path that saw him delving deeper into the worlds of avant-garde, jazz, ambient and improvised music, and his records have become a gathering place for some of the most respected,contemporary, adventurous and avant-garde musicians that have helped Sylvian to create his timeless music, and have buoyed his artistic integrity further. Fired up by the possibilities that have opened up to him it appears that there was an outburst of unbounded creativity that saw him releasing a string of introspective albums that still stand up as some of the finest achievements in contemporary music.

The book itself over spills with details of every song that Sylvian has written both for his regular releases as well as for those with other artists, and Young doesn't leave a stone unturned. The writer has really done his research about each record and has shed a light even to the most obscured ones, like Alchemy: An Index of Possibilities, (Virgin, 1985) which was a cassette only release and an obscurity in his discography, or the biographies of artists that have crossed path with him. But all throughout his career Sylvian has clearly separated his private life from his public persona and that side of him has been out of reach from the general public. Unlike plenty of others he never had to compromise his dignity by indulging in distasteful behavior of a celebrity star (as often is the case). Therefore it is difficult from the start to have a clear and objective biography about David Sylvian especially when he didn't have any involvement in the writing of it. Rather, the book had been constructed from a vast number of interviews, articles, reviews and press releases.

What is presented, instead of a regular celebrity biography, On the Periphery is more of a musicological study with attempts to give descriptions of Sylvian's motivations, state of being at the time of writing his songs or music, his religious beliefs and quests. While Sylvian has spent most of his life in thepublic eye, and has reinvented his music from record to record along the way, he hasn't got much better with the years at explaining what these dark, reproachful, and sometimes caustic songs, occasionally filled with religious allegory, self-examinations, disappointment,warm sentiments and spiritual reckoning are really about. And he has always deflected questions such as these.

The choice to start from the demise of his band Japan without shedding light on the period that he spent in this band has hindered much about what were some of Sylvian's major influences both musically and artistically. It's like talking about Jimmy Page with Led Zeppelin without any glimpse of his history with the Yardbirds.The band Japan was one of the leading bands of the New Romantics movement at the start of the 80s. That surrounding and those musicians were the first musical schooling that has shaped his musical tastes and instincts. Later, during his solo career some of those former band members have played on his records or he contributed on theirs, not mentioning the Japan reunion under the name of Rain Tree Crow. It was during these years that he got influenced both visually and musically by musicians Brian Eno and David Bowie who get mentioned very scarcely if at all. The artistic reinventions in his music were in debt to them much more than acknowledged in the book. Plenty of Sylvian's collaborators in the first decade of his solo career had a reputation of collaborating with Eno (from trumpeter Jon Hassell, composer Holger Czukay to guitarists Robert Fripp and Michael Brook) and beside the ambient leanings, the video Steel Cathedrals was clearly inspired by Eno's first art video Mistaken Memories of Medieval Manhattan rather than by Goddfrey Reggio's masterpiece from that period Koyaanisquatsi. As for Bowie, apart from his visual androgyny, music experimentation and changes, Gone to Earth(Virgin, 1986) was half songs and half ambient recordings, much like the famed Berlin era Low (RCA, 1977) and Heroes. (RCA, 1977)

Also, the book doesn't delve too much on Sylvian's artistic tendencies. His recordings have always functioned on many different levels and beside his lyrics and music, the artwork has also constituted as part of the whole, much in the same manner as theECM recordings Sylvian has also admired. In a way, besides serving as beautiful objects, the artwork on his releases also referred to inner and personal landscapes as much aural ones. But while the author acknowledges Sylvian's art leanings and names some artists, like Frank Auerbach, it is really a shame that the author missed to acknowledge the contributions by painter and designer Russell Mills orphotographer and film director Anton Corbijn's to Sylvian's output.Mills had been working with Sylvian starting from 1984 when he did a magnificent cover for a Japan compilation Exorcising Ghosts. (Virgin, 1984) This legendary designer who up to that point was knownfor his work with Brian Eno, among others, had contributed greatly to Sylvian's covers starting from Gone to Earth, all of the releases in the 80s, the stage design for the In Praise of the Shamans 1988 tour, the crowning achievement in the form of the Weather box release (Virgin, 1989).

Rather, he gets mentioned very scarcely for Sylvian's guest appearances on both of his records and the joint effort they did, the installation, Ember Glance. On the other hand Corbijn isn't mentioned at all. He directed one of the first videos that Sylvian did "Red Guitar" and "The Ink in the Well" or publicity photos. Some of his photographs are featured on the Everything and Nothing (Virgin, 2000) compilation. Too little has been said about the art side and the many artists that have contributed to hisreleases and it is known for Sylvian to produce limited number of copies of books and paintings. In the later stage of Sylvian's careerwith Samadhisound, designer guru Chris Bigg took over the art worknot just for the Sylvian's releases, but for the whole ofSamadhisound releases.

Speaking of Samadhisound label, there is plenty to be toldabout, especially about its roster and releases by people fromvarious generations of avant-garde composers from pianist Harold Budd(for which Sylvian produced the long remix that appeared as a bonus cd to his Avalon Sutra (Samadhisound, 2005) record), writer and composer David Toop among others. Obviously in order to promote releases on Samadhisound, as an independent artist and label owner, Sylvian opened up more to the press and there are plenty of interviews and reviews to be found on the Internet. That is why that stage of his career is easier to follow and analyze. But again, the balance between running a good narrative while simultaneously deciphering lyrics and giving greater space to biographies of all of Sylvian's collaborators than necessary has been distorted in the last few chapters of the book.

On the Periphery is a good and detailed biography about the music that Sylvian has created and is most up-to-date. What lacks, apart from imbalances and several omissions, is the critic. The critic in Mr. Young seldom emerges. He is a fan, asmany of us are, but besides acknowledging that there have been negative press reactions or negative statements as in the section about the Rain Tree Crow project, given by his associates, the late bassist Mick Karn or his brother, drummer Steve Jansen there aren't any critical opinions about weak spots in Sylvian's oeuvre. Sylvian's body of work is not only vast but also, instead of getting deeper into some of Sylvian's influences, friendships and relationships, there is every single detail of his recording process and his collaborators. On the Periphery is a better-than-average biography, it is patient and respectable, more of a look into this man's creations rather than his life in general.