By MATTHEW SUMERA
August 31, 2007
Sign in to view read count 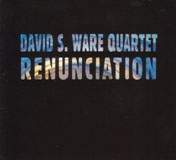 While it is always tempting to over-praise the final work of any major artist—in this case arguably the greatest jazz combo of the last twenty years—sometimes a more measured, nuanced approach is useful. After all, hagiography does little to situate such works within a larger oeuvre, and sometimes the task of contextualization is exactly what one most wants from criticism.

With that said, Renunciation, billed as the last incarnation of the David S. Ware quartet (Ware on saxophone, Matthew Shipp on piano, William Parker on bass, and Guillermo E. Brown on drums and percussion) feels less like an immense, concluding, culminating statement than one may hope. Certainly there are moments of profundity, especially in the massive theme of "Ganesh Sound and "Ganesh Sound (reprise), built around a simple, folk-like theme the reiteration of which provides the ideal setting for Ware's unencumbered musings. At just over eight and a half minutes, the first reading of the piece is as powerful as any statement the quartet has issued. More than anything else on the disc, "Ganesh Sound" captures best the essence of renunciation Ware addresses in his liner notes.

Much of the proceedings, however, are taken up with the less than focused "Renunciation Suite, a three part movement in which the individual members all step out, oftentimes to staggering fashion, but which, taken in the whole, ultimately loses momentum. "Renunciation Suite I is the least clear of all, with short interchanges between Ware and the trio, the terseness of which perhaps speak volumes about the mindset of the individual members as they near the end of their run. Perhaps not. Either way, the ambivalences of the piece and its lack of center—especially following the sheer weight of "Ganesh Sound —soon result in diminished returns.

"Renunciation Suite II, on the other hand, is a powerfully concise statement, with Shipp's blend of polyrhythms and quick stabbing runs setting the primary course. Brown is the essence of fluidity throughout, a watery shimmer. As always, Parker more than makes his presence known, giving plenty and receiving as much in return. "Renunciation III, a duo for Shipp and Parker, has much to applaud as well. It also, though, seems just a bit too long and looses focus during a lengthy, mid-range, arco-heavy section in the middle.

Revisiting "Mikuro's Blues —also found on Go See The World (Columbia, 1998) and the epic three disc set, Live In The World (Thirsty Ear, 2005)—is a stroke of genius and helps to provide some perspective on the working nature of the group. There's little else in the last twenty years as powerful as the combination of Shipp's block chords and Parker's looping syncopations, and it's a treat to hear them revisit this now standard tune. Ware seizes the moment, and all the majesty the group is capable of is once again allowed to shine forth.

Two pieces end Renunciation, the first being a reprise of the aforementioned "Ganesh Sound, a stately summation which should have ended the affair. Instead, the listener is treated to an unfortunate three minutes of crowd exhortation on the part of the emcee, as if both the audience and quartet needed to be convinced of continuing. Any sense of renunciation is lost by way of cheap hawking. When they do return, the group hits fast and hard through "Saturnian, full of abrupt stops and changes of direction. It's a fun romp, but one yearns instead for the grandeur hinted at, and oftentimes achieved, within the previous hour.

As a final testament, one may have hoped for something else. And yet, given Ware's own statements about the end of the group—simply, that they don't work that much in the U.S. anyway—one can't help but also think that this is perhaps the perfect way to close. After all, this is a working group, and as such, its music is ever always nothing more than a process of continual invention. Culmination, perhaps, isn't the point at all. In the end, then, what matters most are those countless interactions, both large and small, and the continued reverberations sent forth, sounds and feelings which will most certainly be heard for years to come. For now, we can be thankful for the decades of music from the David S. Ware quartet. We can be thankful for the gift they have shared. And we can be thankful for the ways in which they have helped us to re-hear.