David Johansen at The Space at Westbury 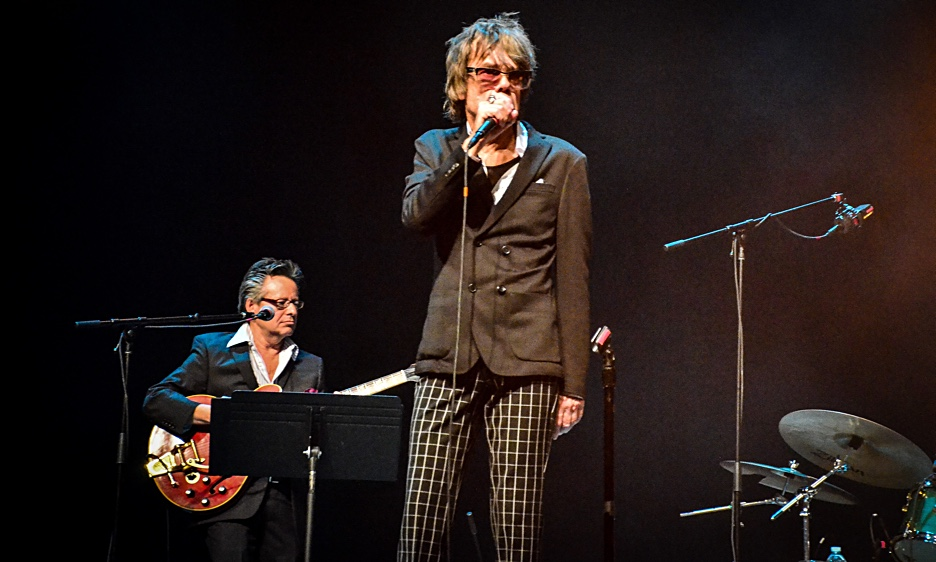 David Johansen made his musical bones in the early 1970s as the lead singer and songwriter in the seminal proto-punk band the New York Dolls. Johansen and guitarist Johnny Thunders wrote the majority of the band's original material. Unfortunately, the Dolls were critical darlings but not a true commercial success. During the band's short first act, it released two Mercury Records albums, the eponymous New York Dolls (1973) and Too Much Too Soon (1974). After the Dolls disbanded, Johansen went on to a successful solo career (as both David Johansen and his alter-ego Buster Poindexter). In addition, Johansen has acted in several films during the '80s, '90s and in the new millennial. He has also appeared as an actor in numerous television series, most notably as Eli Zabitz in the HBO drama Oz. Some of his notable film roles include: the Ghost of Christmas Past in the Bill Murray-starrer Scrooged and the part of Looney in Let It Ride which also starred Richard Dreyfuss. He and co-starred with John C. McGinley in the movie Car 54, Where Are You?, which was based on the classic television series. Johansen also had a supporting role with Mick Jagger and Emilio Estevez in the movie Freejack.

After the New York Dolls disbanded for the first time, Johansen continued to pursue his singing career. His first two solo albums, David Johansen (Blue Sky/Columbia Records, 1978) and In Style (Blue Sky, 1979) both received favorable reviews and are now considered new wave/pop classics. Johansen also released the live albums The David Johansen Group Live (Epic Records, 1978) and Live It Up (Bue Sky, 1982) and which cemented his reputation as an amazing performer.

As a solo artist, Johnasen is best-known for his songs "Funky But Chic," "Melody," "Heart of Gold," and "Frenchette." Johansen also achieved success with his version of "We Gotta Get Out of This Place/Don't Bring Me Down/It's My Life" from Live It Up.

Following the last Buster Poindexter release, Johansen returned to releasing albums under his own name. His most recent Chesky Records releases, David Johansen and the Harry Smiths (2000) and 2002's Shaker, feature blues, folk and country tunes.

Frankenstein 3000 is a rock band based out of Asbury Park, NJ. Comprised of Keith Roth on vocals/guitar, Clint Gascoyne on drums, Tommy Tafaro on lead guitar/backing vocals and Eric Hoagland on bass/backing vocals, F3K count the Ramones, Cheap Trick, Kiss, the Rolling Stones and the New York Dolls among its influences. As such, it is only fitting for these sons of Jersey to open for David Johansen.

On a cool late November evening David Johansen and his band, along with Frankenstein 3000, touched down at the Space at Westbury and provided the faithful with an evening of powerful rock 'n' roll.

Frankenstein 3000 began the evening with a short but strong set of fast, raw, hot, sweaty rock. Highlights of its set, which centered on tracks from its 2018 release The Blunt Truth! (Main Man Records), included the opening number "Second Time Around," "Welfare Mothers," "NYC," "Feeling Alright Once More" and the set-closer "Heroine."

After a short intermission, Johansen and his band appeared. Poindexter was nowhere in sight, but Johansen stated that he had "a lot of bands and musicians to support and Buster is out there somewhere playing a gig, tonight." Johansen's powerful set featured timeless Dolls' material, his best solo material and choice covers. Opening with the solo tune "Frenchette," Johansen and his amazing band cranked out a set that featured New York Dolls classics like "Looking For A Kiss," "Human Being," "Lonely Planet Boy," a fantastic take on "Piece of My Heart" that segued into "Hang On Sloopy," and so much more. Additional highlights included: "Funky But Chic," a slow and stripped down version of "Melody," the Muddy Waters blues classic "Mannish Boy," a beautiful version of "Heart of Gold," "Pills" and "I'm A Lover."

When he rhetorically opined, "What should we play next," he was greeted with a chorus of requests. The loudest and last was for "Personality Crisis." Johansen chuckled and responded, "We could play that, but then we'd have to go home." The statement got a laugh even though it clearly telegraphed the evening's encore.

The main set ended with a nice version of "Jet Boy." Johansen danced his way off the stage, but returned almost immediately. His band members never even got the chance to put down their instruments and they launched into the encores: "Wandering Spirit" and a tour de force version of "Personality Crisis." At the end, as the lights were coming up, Johansen was seen shaking hands and thanking the fans who clearly loved the powerful performance.