By PHIL DIPIETRO
November 21, 2006
Sign in to view read count 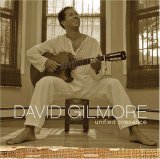 Let's break it down. You won't find this statement in David Gilmore's bio or on his website, but here it is: Gilmore is one of the baddest guitarists on the planet. Here's why—rhythmic acuity. If I were to write a book on jazz, one of its chapters would be titled "Instrumentalists Who Play Linear Rhythms", or maybe "Harmony As A Drum." I'm talking about players like Vijay Iyer or Marc Cary on piano, saxophonists like Rudresh Mahanthappa and Steve Coleman, and guitarists like Gilmore and...well, who else exactly?

The blank is pretty big. Certainly, there is a long list of musicians who move a lot of air in their lines, who weave in and out of rhythm masterfully, with impeccable command of time. Gilmore comfortably fits in this category. But let's take this observation to the next level—to the guitar as drum. This doesn't refer exclusively to chordal or "rhythm playing, but playing the linear line, the single notes, as a rhythm—at times locking with the dominant rhythm and at others interlacing, or speeding ahead and then throttling back, connecting perfectly to the "lock of the bass and drum.

Put another way, Gilmore's 8th, 16th, 32nd and 64th note lines are not merely that: they have their own groove, their own "pocket. Gilmore's burning rhythmic intent is something very few other players display, or even have at their disposal. And if they do have it, they cannot use it as consistently and as stunningly as he can.

Gilmore's rhythmic acuity is based on family tradition—passed down from a father who is a graduate of the New England Conservatory in percussion, and a brother, Marque, who has played with Graham Haynes and Sting, and who is one of the world's elite drummers. David Gilmore himself began as a drummer, and in a sense, he's still at it.

Here's another thing. Gilmore has a deep and abiding respect for the jazz guitar tradition, especially the fat-bodied bop kind. He counts the Martinos, Bensons and Malones of the world as friends and deep influences. But his recorded career has not prominently displayed that side.

Gilmore also falls in the tradition of guitarists who are unabashed in their spirituality. But his is refreshingly dogma-free. Take this quote, regarding the title of this recording, from the stellar liner notes by Bill Milkowski: "Unified Presence to me refers to the spirit, the universal mind, the universal presence of consciousness within all of humanity. And it suggests that we are ascending to a level of oneness, if you will. It also refers to the unified presence of the musicians on the record, and that musical in general is a unifying force. It's a language that transcends all languages.

It's these three elements—the sophisticated and ever-present rhythmic emphasis, the bop essence and an accepting spirituality—that combine to impart the palpable aura of mystic intensity pervading the Unified Presence session, pushing it into the circle of the premier releases of 2006.

For this project, Gilmore has plucked mightily from his circle of gifted friends to form a band capable of transmitting his complex (this is some difficult music to execute) yet hard-grooving (not so difficult to listen to) offerings. One of bassist's Christian McBride's recordings, starring Gilmore, is called Vertical Vision, and Unified Presence begins with the leader ripping his axe some new F-holes through an odd-metered 3-D chessboard of "Vertical Path, with his trio line-up of McBride and drummer Jeff "Tain Watts.

But the tone and the vibe here are not so reckless as on Ritualism, Gilmore's previous disc. That's due to the aforementioned bop element centering the tone and leavening the vibe. There are complex, odd-time, unison passages melding to 4:4 walking-bass swing, then shifting to intricate bridges, but all are ball-and-chained to McBride's cavernous acoustic sound and Tain's rocking ride cymbal. As the performance moves through Gilmore's dancing solo, into McBride's, rendering the massive instrument to his will, to Watts' trading of not-fours with the duo, you can imagine each member confidently smiling, effortlessly navigating and grooving this thicket of form.

The second track, "Protean Way, offers a welcome opportunity to take a deep breath. With a cadence that inhales and exhales, saxophonist Ravi Coltrane massages the melodic line and the listener with his soprano. A brave cat to have ever considered picking up that instrument, Coltrane now has his own patent on the Coltrane family soprano glow. Here he progressively builds to controlled fever pitch, wending his way angularly through the harmony.

Besides his musical contributions, Coltrane can take credit for presenting Gilmore at a level concomitant with his talent, assembling and releasing Unified Presence on his own RKM imprint. The musical bond between the pair peaked this summer when the two players did a string of dates and a weeklong engagement at New York's Birdland, as co-leaders of a quintet including Luis Perdomo, Drew Gress and EJ Strickland.

Want easily digestible complexity? Know that "Douala is a deeply African-influenced, 12/8 piece with three against four on the bass and drum, respectively. Then dance to its infectious groove, something you can continue to do as Gilmore solos with lightning fluidity on his nylon stringed classical cutaway.

"Law Of Balance bears most resemblance to previous Gilmore workouts. You recognise the prodigious virtuosity and the voracious manner by which the tune is devoured. Switching to electric bass, McBride will drop a jaw with his fluid yet huge-sounding approach to navigating Gilmore's micro-changes as written. But it's Watts that will astonish, simply because he's never put a fusionesque, chops-busting performance of this type to record before.

Throughout the disc, Gilmore proves he can do nothing short of everything—including a gorgeously authentic Brazilian interpretation of Toninho Horta's "Broken Kiss, complete with an enthralling guest vocal from Claudia Acuna—while never breaking a sweat. Still mistakenly regarded as an up-and-comer, a thorough examination of the aural record will reveal that Gilmore has leapfrogged ahead of many of his contemporaries—and even more "established virtuosi who might be considered his influences.

But Gilmore's had his own thing, a thing more different and more valuable, for a long time now. Over a decade ago Wayne Shorter jettisoned his ill-fated band for the High Life tour, retaining only Gilmore for the next outing. There's a reason for that and it's strikingly apparent in the grooves of Unified Presence. David Gilmore is one of the greats.