David Fiuczynski: In the In Between

By DANIEL LEHNER
March 4, 2013
Sign in to view read count
"Playing with him just really reinforced where music should go. The approach is very organic. Players usually end up shooting themselves in the foot from the usual hurdles, like they'll do something simpler because they can't afford to do what they want to do, or there's so much technique that they let the instrument take over, or maybe you have overdeveloped players, but they're not really composers. Jack is everything. You don't have to tell him anything; you just say, 'This is the piece,' and he does it."

The larger context of the record has been the Planet Microjam Institute operating within the context of Berklee, formed with the mission statement of introducing students to non-Western microtonal sources as well as encouraging outside-the-box thinking and innovation. Boston, through New England Conservatory, had been a major catalyst for Fiuczynski's first forays in microtonality in an academic context.

"I basically got my masters at NEC in microtonality. I took Joe Maneri's last class. Joe was the big microtonal legend in Boston. There are other classical microtonal heavyweights, but besides classical, he was also an improviser. I split my lessons between Bob Labaree, who did Turkish music studies and Peter Row, a sitarist, with Indian music studies. I took one semester of independent study with Shin-Yi Yang, who's a Chinese gu-zheng player, which is a type of zither."

Berklee proved to be a ripe breeding ground for Fiuczynski's brand of tutelage, mostly due to a statement made by the president Roger Brown. "The administration was looking to do something new, and Roger Brown had said that the ultimate purpose was to create the circumstances for miraculous music making, and I thought that was pretty happening. The exciting thing about Berklee is that small things can turn into big things. The big gospel night, which probably draws 1,000 people a year, started out as a little student club. So my institute started when my students had approached me. In order to have student club, you have to have a faculty signature. I guess they'd asked me because nobody else was crazy enough to sign up for a microtonal club. This was actually before I was doing a lot of microtonal stuff.

"So with my masters, I went to the school, and I'd asked if I can start a Japanese proto-class. I met with the head of the ensemble department, and he'd said that he honestly did not understand what I was trying to do, but he wanted to see how it would go. So I've had a microtonal ensemble for about five years, then the school wanted me to showcase what we were doing, so they would fund a few concerts per semester. We did a few in town, in New York and Philadelphia. In preparation for the Performance Division grad program, which should start in 2014, the curriculum is going to be based upon basic requirements; then the grad Performance majors will have six institutes to choose from in where they want to focus. It could be Danilo Pérez's Global Jazz Institute, a more avant-garde institute which is more interdisciplinary, where you could do dance or video, et cetera, and the MicroJam is one of those institutes. That's the next step, and then it'd be a real institute. Right now, it's just me taking one class and out of that doing different projects, some high profile like the Guggenheim one."

Fiuczynski has been equally as busy with his side project. He is presently in the studio with his longtime associates Screaming Headless Torsos, in anticipation of a new record that will be out sometime this year. His most recent sideperson work has been with Rudresh Mahanthappa on his new record Gamak (ACT, 2013), featuring Dan Weiss on drums and Francois Moutin on bass, and making recent appearances at clubs like Le Poisson Rouge for the 2012 Winter Jazz Festival. Mahanthappa has described the project, derived from the word "gamaka" (the ornamentation used in Indian classical music), as an expression of the melodic ornamentation as it relates to the beauty of melody as it occurs worldwide, which fits in neatly with Fiuczynski's conception. However, even though Mahanthappa and Fiuczynski are part of only a handful of musicians who can or even want to combine Eastern disciplines in Western contexts, there are still unique differences between them. 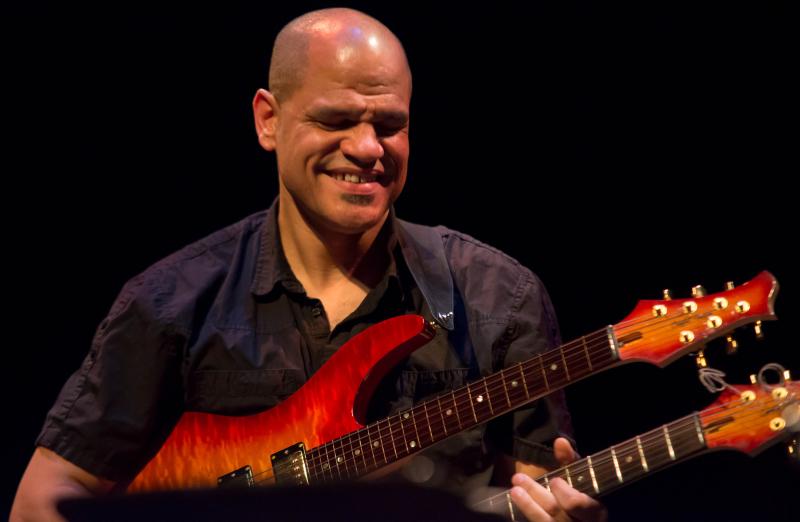 Fiuczynski explains, "One of our basic differences is that he has a completely different rhythmic approach; his rhythmic contexts are often (though not always) based on Indian music. Also, he basically only does quarter tones, and I work off a finer grid of 72 notes per octave. The other thing is that on the CD, it's all me harmonizing. There were no explicit harmonies, just modes, and he had said, 'Do your thing,' as we do in jazz, for the same reason I'm sure Miles Davis had gotten Bill Evans to play on his records for his sense of harmony. Rudresh and I played for a few years with Jack [DeJohnnette], and that was a fertile ground to get comfortable with each other. So I'm taking his modes and stacking them into chord scales, and I think some of the results are pretty startling."

The Indian-based rhythms, which have been a key component of Mahanthappa's music for years, were something of a difficult task for Fiuczynski. His first experiences playing with Weiss, who had been studying the aforementioned rhythmic theories with tablist Samir Chatterjee for years, was a bit of a trial-by-fire experience. "My first thought was 'Help!' [laughs]. There's a piece we played that's in 4/4, and he would start to do stuff, and I would just get lost. Dan is amazing; I'm probably just going to take lessons with him to help me along."

Fiuczynski noticed certain specific differences in the rhythms of Indian classical and Western/American groove music. "The big thing for us Westerners, or people who haven't studied Indian music, is that our music is very divisive. We're interested in how you can divide a whole note into a half note and that into a quarter note and so on. With Indian music, one of the first things that they do, and this is a gross oversimplification, is that they're additive. They're much more interested in looking at it like, 'Well, here's the cycle, and if I play this rhythmic unit, how many times do I have to play it through how many cycles until it lands on the one again?' which is a completely different way of thinking.

"Also in Western music, we often have larger units first, like 'BOOM- [rest]-boo-KAH' [funk rhythm]; it's big, then small. Think of the 'Mission Impossible' theme or 'Take Five," with the 5/4 patterns. It's 'DAH-DAH- dah-dah,' big-big-small-small. With Indian music, though, they'll often have smaller rhythmic units first, which was very difficult for me to get used to because I would always shift to the larger one being the focal point. We also gravitate towards something low being the downbeat. So if Dan does his thing, and it's a small unit first that's high, I'm basically toast [laughs]. But a big thing I put forward is that microtonality really needs a whole new rhythmic context, and this is a huge opportunity. We'll be back at Le Poisson Rouge in April, and we'll have had about 30 gigs. I think the music will be strikingly different. I'll certainly sound better, at least."

Fiuczynski's incredibly busy schedule has not been a hindrance to his creativity but a boon to it. The influence of Boston, either through New England Conservatory, The Boston Microtonal Society or the diverse range of musicians within, has been enormous. "I've been shuttling back from Boston to New York for about 30 years. People are drawn to Boston for education and New York because of all that's there. I've always been curious about mixing things, so I've kind of had that built in. I grew up in Germany, my dad's German, and my mom's from South Carolina, so I've always had that, but that curiosity is reinforced in Boston and NYC. The gospel thing is so big in Berklee, and I think that's where a lot new ideas, especially new rhythmic ideas, are coming from.

Boston's prevalent gospel music scene has been a microcosm of what Fiuczynski has come to love about New England and a prime example and summation of his ideas about music and culture. "A lot of rhythmic ideas come from the African-American community. The gospel church is such a big influence. And again, speaking social and economic factors, I know a lot of players that fund their foray into NYC by having a gospel gig in Boston, being on a 3:30 a.m. bus to Boston to do their bread-and- butter gig. Then that gospel influence, if nothing else than a really fat pocket, goes into the music. That's really exciting; I'm always looking for new musical contexts. I'm looking forward to seeing what the next 'thing' is going to be."