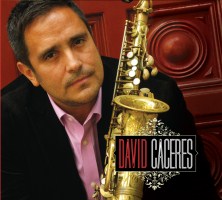 Comparisons are odious, and can certainly lead to bias. Moreover, in the case of David Caceres, they simply do not capture the immense character that holds together the artistry of this astounding musician. True, Caceres channels Donny Hathaway, and can wind up closing in on the soaring falsetto of Stevie Wonder, but his phrasing is quite different. Even when he is waxing eloquent, wooing a lost love, or lamenting the end of a relationship, he does so with such strength of character—an almost in-your-face strut of someone who just would not be put down, no matter what the circumstance. Caceres has a broad range, beginning with a deep and winding tenor, which he sometimes drawls out on certain phrases that just happen to end in vowels. Then, with brazen annunciation, almost as if he has reversed his attack to a direct one from a heartbroken glissando, he will crackle in the upper register, taking command of the phrase that sits atop the head of the piece.

Indeed, such quick turnaround and swaggering vocalizations speak of a vocalist with considerable maturity, and a deep and dark duende that comes from eschewing style and focusing directly on the intensity of the feeling and emotion—a secret that flamenco artists have been harboring for centuries. On "Sacred Path," Caceres displays this magical trait of working sans style, but in the deepest part of duende, which makes him a sublime master over the ethereal exposition. Aaron Parks adds to the drama of the song with a stuttering solo that breaks up the vocal, before Caceres powers in with an intense alto saxophone solo.

So who exactly is David Caceres? Is he a singer who can play alto saxophone, or an alto saxophonist who can sing? In this regard, the great Billy Eckstine comes to mind—the man with a horn and a voice to match. Caceres is, however, not the epitome of cool as Mr. B was. Rather, he is an intense character who knows his chops, and uses the intense characteristics of rhythm and blues to deliver stellar performances on his artistry. Moreover, Caceres is an immaculate storyteller, who combines a very elastic voice and an equally pliable alto horn to create the drama and intensity of his world for all to inhabit.

Two standout tracks that mark him as a fine vocalist in the jazz manner are Thelonious Monk's "'Round Midnight" and Herbie Hancock's "Tell Me a Bedtime Story." "Bird of Beauty" is his duet with the magical Portuguese of Margret Grebowicz, as she cracks open the bossa nova rhythm, but only when she drops quarter notes with aplomb and Caceres chases the infectious solo with a burning alto saxophone break of his own does the music quite literally explode. It is then that David Caceres comes close to being a star burst on the ubiquitous scene, with a masterly almost symphonic vocal album.

Symptom Unknown; You Can Bring Me Flowers; The Way Young Lovers Do; Giving Up; 'Round Midnight; You Make it Easy; Sacred Path; Tell Me a Bedtime Story; Seems So Long; Bird of Beauty; Gratitude.