David Browne: So Many Roads - The Life and Times of the Grateful Dead

By DOUG COLLETTE
September 26, 2015
Sign in to view read count 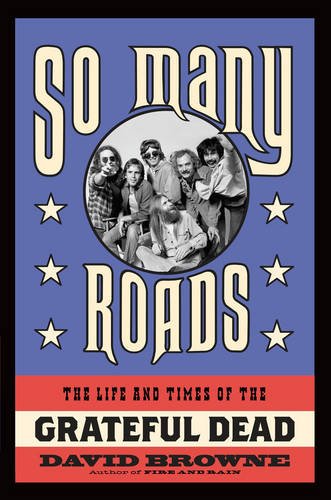 In the unusual way it mirrors the Grateful Dead's singular approach to improvisational music, David Browne's So Many Roads is unique in the extensive bibliography devoted to the iconic rock and roll band. Like the Dead as they introduce the themes of a song, explore it and often move in and out of those motifs, often leaving them behind altogether, the author chooses significant days in the iconic group's history and explores not only the details of the events that particular day, but delves further into them to illustrate the profundity of the date in question within the Grateful Dead timeline.

In his forward, Browne admits how he modified the original concept of the book—fifty telling days as befits the band's fifty year history—but nonetheless retains the essential outline. Much like the arrangement of a song, the structure allows for, and inevitably furthers, the illumination of a number of critical progressions in the group's evolution, often as not foreshadowing and/or foretelling the future: only seventeen pages in arrives the first mention of Jerry Garcia's penchant for grumpiness and his 'secret drug life."

The fifth chapter focused on November 2, 1969 is most representative of Browne's creative approach and it also happens to be most pertinent to latter-day Dead activities (coverage of which from this decade is remarkably to the point though abbreviated: Browne has an uncanny way as a writer to get right to the proverbial nut of a subject). In contrast to most such play by plays, the evolution of this live version of "Dark Star" is at once redolent of the mutual empathy the Grateful Dead displayed in the musicianship and representative of the individual personalities that, outside the realm of music-making, made for such fractious relationships throughout their career. Here, as throughout the book, Browne accepts the perspective of band members, crew and business office personnel, members of the Dead family and those in further reaches of the community to form virtually a three-hundred sixty degree scan of the events. It's key to the overall success of So Many Roads that, even with this broad a panorama, David Browne goes proportionately deep into their significance.

The focused means by which the author relates The Life and Times of the Grateful Dead, allows him to make relevant that internal dynamic, not just within post-Jerry Garcia projects in 2004 and 2009, or even the 'Fare Thee Well' shows of 2015, but the long-term motivations within the group. And it's not relegated simply to the other members' inability to successfully confront their titular leader on his vices as a means to change his debilitating habits: just as his stature within the band allowed him final say on any number of pragmatic business decisions, his aversion to confrontation led to questionable de facto moves—such as Dead concerts held in stadiums, shows he disliked but would not refuse—but also to the quick succession of changes in his personal relationships in the last decade of Garcia's life.

It's thus impossible to underestimate the value of So Many Roads in this regard and with respect to the other topics to which David Browne devotes his book. Granted the benefit of hindsight, but the penetrating acuity he applies to the information he collects and presents it is a testament to his skill as a writer as well as his objectivity. For instance, his account of the changes in the Grateful Dead position in culture based on the success of their song "Touch of Grey" may be more enlightening than any other theme apart from Garcia's ongoing health issues (drugs and otherwise): not only does the author state outright, and then carefully remind, of the financial success of the group, based on their touring revenue, but he also renders graphic the negative, i.e. violent, aspects of their road appearances. The juxtaposition is highly dramatic.

Unless and until long-time band publicist and designated historian Dennis McNally updates his tome A Long Strange Trip: The Inside History of the Grateful Dead (Broadway, 2002), The Life and Times of the Grateful Dead can comfortably co-exist as a near-immaculate modern-day entry into the lengthy bibliography devoted to the Grateful Dead. David Browne not only updates the arguably well-known aspects of the group's history, such as their difficulty in working productively making music off the stage, he offers some less well-documented information on two stints in recording studios that were completely unproductive in terms of useful content, including one latter-day interval involving 1994 work on (at the time) recently composed material including "Days Between," one of the final gems from the composting team of the Dead's guitarist/vocalist and his magnificent lyricist Robert Hunter.

In fact, the evocative nature of that song, clear-headed as it is, might well have been an equally, perhaps even more appropriate title for this book. So Many Roads is so comprehensive and detailed as a whole, its blemishes are minor and well within the margin of human error: for instance, the erroneous use of 'complimentary' for 'complementary' is quite common these days. More crucially, the extended interval where the narrative thread disappears altogether, perhaps not so coincidentally around the year 1975, in the wake of the demise of the band's own record label and the fabled 'Wall of Sound,' ultimately serves the purpose of even more pointedly reflecting the connection of this writing to the idiosyncratic Grateful Dead modus operandi: its overall success wholly and completely supersedes such static intervals, rendering transcendent what's truly memorable about the experience as a whole.