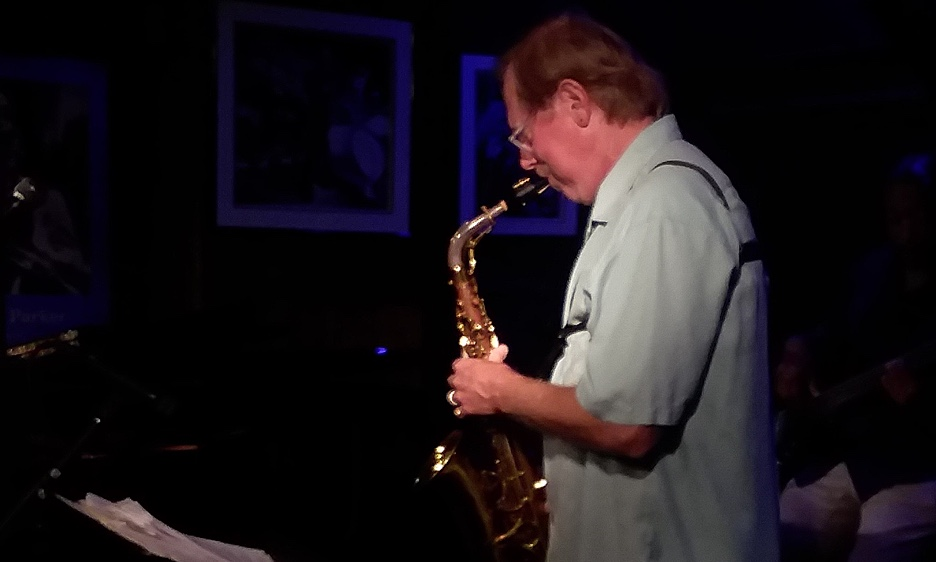 Alto saxophonist David Bond is new to Philadelphia and probably unfamiliar to jazz fans here. I went to hear him because I am always interested in hearing someone new, and two of the personnel listed were revered Philly players, pianist Tom Lawton and bassist Lee Smith. Looking Bond up on my phone before the set, I saw that he has worked with the great saxophonists Archie Shepp, Dewey Redman, and Sonny Fortune, and drummers Max Roach and Ed Blackwell. He is the leader of a recording with Sun Ra and Marshall Allen. Inspired to be a jazz musician by John Coltrane's later, more daring music, Bond was influenced in the direction of free jazz by Ornette Coleman. He has a solid track record of recordings as a leader with some of the best players. But it looked like a few years ago, he cut down his activities. He's resided in Boston, and recently relocated to Philadelphia. I therefore had no idea what he was going to play, except that it would probably be experimental in one way or another.

On the bandstand, Bond looked more like an accountant or a librarian than a jazz musician. He was clean-shaven, his reddish hair a little overgrown but well-combed, and he loosely wore a light green sport shirt. He came on stage and introduced himself like your Uber driver might. With all that, there was virtually zero electricity.

Then he and the group started playing, and the only thing that could be said about it is that it was utterly fascinating. First of all, on the opening number, his original "Early Show," he revealed a beautiful saxophone sound that would have made Charlie Parker blush, and some brilliant fast lines showing an absolute mastery of the instrument and melodic lines. After he completed an extended phrase, he paused as if to let it settle in your ears. Each phrase was like a tasty h'ors d'oeuvre, and you couldn't wait to get to the main course, which he turned over to his cohorts, as you might treat a guest sous-chef in the kitchen.

The second tune in the set of all originals, "Clarity" perhaps suggested some of what Bond was after: a group process. He utilized a framework of repetitive phrases, a musical idea, and a key signature often heard as a pedal point, to give as much freedom to each musician as possible without losing a sense of the tonic. In this case, Lawton, Smith, and guitarist Dan Hotep chose modal progressions suggestive of R&B to weave imaginative solos that at times were breathtaking. The absence of drums furthered the space in which they worked. Lawton's solo shone like a jewel from a symphonic work. Smith and Hotep invented imaginative passages that could have served as music for a film noir. Then Bond returned with the final chorus of his magical phrases, each of which again seemed to end all too soon.

Bond's purposes were further defined when he gave a brief talk to introduce the tune "Klee's Machine," indicating that it was inspired by a Paul Klee painting of singing birds on a wire controlled by a machine-like device below them. Bond is an admirer of Klee and other modern artists (he has a tune called "Picasso Dancing with Satie," the latter being an impressionist composer whose music is heard in Woody Allen's film, Another Woman). So he is linking music to the visual arts, with the latter again implying a space that is waiting to be filled. After the set, Bond explained to me another important connection to the Klee painting. The birds are connected by a high wire, which relates to his concept of "modular dynamics," a way of building interconnected melodies upon one another just as birds form a chorus of their diverse songs. Throughout the set, there were occasions when the musicians co-improvised in a way that seemed independent of one another yet integrated by the pedal point and the feel of the tune. This idea is not new to jazz, but Bond, working with Dewey Redman, turned it into a strategy or form. Bond wants to make it a structuring principle for creating new music.

The next tune, "Chance," sounded like a songbook standard, and once again all the solos, especially guitarist Hotep's, were at a very high level of sophistication. "Sunflowers" perhaps suggested the famous Van Gogh painting, again allowing for imaginative improvising. The set concluded with a brief but energetic blues ("Bb Mamas").

All in all, David Bond showed himself to be a seasoned, creative musician whose lack of charisma is made up for by his high class saxophone playing and the way that his arrangements and modus operandi generated real inspiration for a group of resilient musicians like those on this gig. An ideal setting for his music would be an art museum or a venue that features avant-garde music. With such support, he has a definite contribution to make to the jazz scene in his new home of Philadelphia.