By DOUG COLLETTE
February 19, 2012
Sign in to view read count 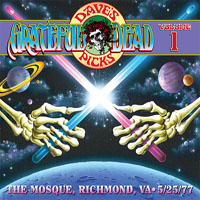 Though it's graphic design and packaging is markedly different than its immediate predecessor of Grateful Dead archive releases, the initial release in Dave's Picks follows proudly in the tradition of the recently concluded Road Trips (as well as the original series to which this one's title refers, Dick's Picks). Overseen by David Lemieux, chief archivist and co-producer of the previous line, as well as the most recent one-off Grateful Dead titles such as Europe '72 Vol. 2 (Warner Bros., 2011), the legacy of this iconic band is in the most capable of hands.

Dave's Pick's Vol. 1 (in a limited edition run of 12,000) is comprised of three CDs capturing a complete performance on May 25, 1977. Those discs are enclosed in a triple fold digipak adorned with full-color artwork, within which resides a booklet containing similarly glossy photos and a Blair Jackson essay evincing his customarily nostalgic (though healthily so) and grounded perspective of this fertile period in the Dead's history.

The content matches the cosmetics here, all of which extends to the inclusion of stage photos on the inside of the booklet sleeve. Much is made of the consistently high quality of Grateful Dead shows during this spring tour of 1977, but there's probably a very practical explanation: the band was rightfully gratified its decision to go on hiatus the two years prior, playing precious few shows, because it left the Dead refreshed and ready for the rediscovery of itself, as a band, in the form of shows like this one in Richmond, Virginia.

With a little distance from the road experience, and free of the stress imposed on the collective by business operations of earlier in the decade— their own record label, the gargantuan technical experiment known as The Wall of Sound—the group is free to play at The Mosque with a sense of freedom unencumbered by the stress of the aforementioned concerns.

Like all great performing units, the Grateful Dead knows the value of space and not just in the exploration of same as conducted so majestically on the show's conclusion in and out of "The Other One," "Wharf Rat" and "The Wheel." As instrumentalists its members allow room between each other, to not only immerse themselves in the sound but to allow the audience to do the same, even if the septet never sounds like it is playing very loudly.

The set list is a blueprint for the slow but sure expansion of the musicianship from tight ensemble work ("Mississippi Half Step Uptown Toodleoo"), slightly looser interplay ("They Love Each Other"), the initial group jams apart from solos ("Lazy Lightning > Supplication") and the segue that opens them up full-throttle toward "Drums" ("Scarlet Begonias > Fire On the Mountain").

Dave's Picks Vol. 1 is an audacious but appropriate inauguration for this archive series. It sets the bar high, but that should only insure subsequent releases match the standards the Grateful Dead set for itself.

CD1; Mississippi Half-Step Uptown Toodeloo; Jack Straw; They Love Each Other; Mexicali Blues; Peggy-O; Cassidy; Loser; Lazy Lightning > Supplication; Brown-Eyed Women; Promised Land. CD2: Scarlet Begonias > Fire On The Mountain > Estimated Prophet > He's Gone > Drums. CD3: The Other One > Wharf Rat > The Other One > The Wheel > Around And Around; Johnny B. Goode.