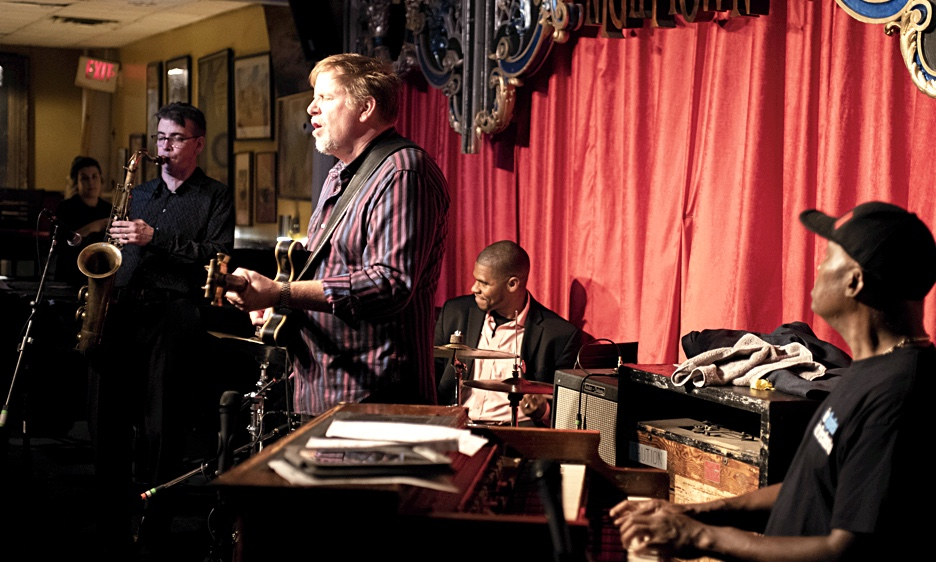 It's a tough sell these days for touring musicians to bring their own ensembles with them as they traverse the country. And let's face it, pick-up bands don't always lead to the optimum musical conditions. That's why it is always a pleasure when New York heavyweights join forces with local talent in a way that is pleasing to both the performers and the audience.

Guitarist Dave Stryker needs little in the ways of an introduction to astute jazz guitar followers. His records consistently top the polls both in terms of artistic value and popularity. In a quartet that featured tenor saxophonist Mike Lee, Stryker recently joined forces with Columbus mainstays Bobby Floyd and Reggie Jackson at Nighttown in Cleveland.

ADVERTISEMENT
The tight and stimulating set offered up proof in abundance that pick-up bands don't need to be lightweight and stodgy. Of course, let it be known that Lee and Floyd have both worked with Stryker before. Lee can even be heard most notably on the guitarist's Messin' with Mt. T album. Furthermore, Floyd and Jackson play regularly around Columbus and can be found every Sunday night at Copious Notes leading the jam session.

The synergy was palpable from the very first notes, as Jackson pushed his backbeat shuffle out front in support of the quartet, all the while Lee wasted no time accelerating from zero to sixty in his own statement. In a mash up of Curtis Mayfield's "Pusherman" and "Superfly," Jackson again impressed us with his chops and tasteful accompaniment. Much to the delight of Stryker, who had never played with the drummer prior to this evening, Jackson's solo gambit was a fluid display of musicality.

One of just a few artists today capable of reimagining pop standards with sensitivity and finesse, Stryker worked up Jimmy Webb's "Witchita Lineman" in a waltz guise for his 8 Track album. With Floyd's unique choice of organ stops, the group gave a seamless performance of the chart that proved how valuable such material is for jazz fodder. Stryker's own "Shadowboxing" was equally engaging, the up tempo romp allowing for an extended dialogue between Lee and Jackson that echoed the title of the piece and found both men going tit for tat.

The ballad "In a Sentimental Mood" was a feature for Stryker, who cast a nice balance between chordal passages and single note runs, all the while his Gibson ES-347 spoke with the warmth and weight of a fine tube amp. Floyd was an asset to these efforts too, with his skills as a pianist playing a part in his overall feel for the organ and his discerning avoidance of the usual B3 riffs. Stevie Wonder's "Isn't She Lovely?" was his show from the start, first in his unaccompanied intro and then throughout his astute backing and sizzling solo.

With a coy sense of humor, Stryker added just the right amount of banter between numbers, his sense of timing akin to that of a stand-up comedian. Recalling his early experiences with Jack McDuff, Stryker quipped, "When I joined the band they finally got a good guitarist." A true flag-waver, "Impressions" brought out the best in everyone and led to an obligatory encore, capping off an evening of outstanding jazz fueled by a synergistic meeting of the musical minds.