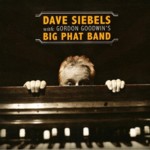 A thrilling collaboration between one of the finest jazz ensembles in the business and a keyboardist whose résumé extends beyond jazz, the self-titled Dave Siebels with Gordon Goodwin's Big Phat Band is, quite frankly, one riveting session of big band music fronted by Siebels' commanding performance on the Hammond B3 organ. Not surprising, when the artistic content responsible for this recording is considered.

Siebels has arranged and produced 27 albums, scored 35 films and conducted 65 musical variety shows. Goodwin's Big Phat Band has received three recent Grammy nominations, with "Act Your Age" making a total of eleven. With musicians like Wayne Bergeron, Andy Martin, Eric Marienthal, Brian Scanlon and Pete De Siena comprising some of the personnel, the Big Phat Band is a world-class orchestra that any musician would love to have as a backup band.

The varied repertoire does contain some charts where the majority of the band is silent, allowing Siebels to perform with a select few players. For example, Neal Hefti's "Girl Talk," performed as a trio with drummer Dave Spurr and guitarist Grant Geissman, just happens to be one of the best readings of this tune around. In a quartet setting featuring Roy Wiegand on a light trumpet, bassist Michael George and Spurr on the sticks, Siebels' "I Love You Even More Again" comes across more like a wedding song than a love ballad. With saxophonist Ed Smart joining Wiegand, Spurr and George, "Sort of Like a Samba" is one of Siebels' strongest.

Still, this is a big band album, and the orchestration starts with Gordon Goodwin's arrangement of Siebels' opener, "The Coupe," a hard-driving burner with the organist providing a Jimmy Smith-like performance, emulating his hero and leading a gutsy showing from the band, including solos from Scanlon and Geissman. Alto saxophonist Merienthal does some of the honors on the raw and funky "Not That There's Anything Wrong With That," but it is actually Siebels who delivers a blistering performance on the organ on this high-octane number. "Da Blues" releases the fine brass section, which goes on a real tear.

The band provides a fresh new treatment to Stevie Wonder's "I Wish," showcasing the talents of band leader Goodwin, who delivers the tenor solo in support of Siebels' firm organ play. The only other standard—the Lalo Schifrin special, "The Cat"—provides a new big band arrangement featuring Sal Lozano's steamy flute solo. The album ends on the drum-pounding percussive blue- chip chart, "The Eleventh Hour" as Dave Siebels and Gordon Goodwin's Big Phat Band complete a dynamic album of big band jazz with elements of rock and Latin jazz to spice up the music.

The Coupe; Not That There