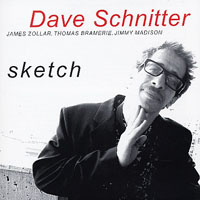 Not only did David Schnitter have the longest tenure of any tenor saxophonist in Art Blakey's Jazz Messengers but he was always present on the most exciting and memorable of Bu's sets that I was privileged to catch. His return to music and recording after a sabbatical of over 20 years is at once cheering and disturbing. There may have been more schooled and disciplined players preceding and succeeding Schnitter, not to mention younger, more marketable icons that attracted record producers following the post-Wynton era. But none of them brought to a performance a huge "unconstructed" tone so disproportionate to the player's diminutive size, a determination to let emotion control technique instead of vice versa, and finally a passion for playing that precluded virtually any "hip" posturing (with the exception of the James Brown-Wilson Pickett style vocals Art Blakey began to require of him).

His comparative neglect for two decades is one of the crueler injustices in a music that is hardly known for fairness. Not a single one of his four excellent LP's for Muse has been issued on CD. As a result, Sketch (along with the more accessible music on a recent European release, Pen Pals ) is a welcome return of the prodigal Messenger.

The music on this recording requires close, attentive listening, and I doubt many listeners will assimilate it in a single sitting. Schnitter plays less symmetrically but more lyrically now, favoring the upper register of the horn and being less conscious of the bar lines. It's as though he's abandoned the influence and powerful breathstream of his former hero, Dexter Gordon, and turned to Ornette Coleman and John Coltrane for conceptual inspiration. Schnitter's sound is now somewhere between Hank Mobley's warm muskiness and Coltrane's direct, vibratoless approach. It bears a mournful, elegiac quality that no doubt tells a story in itself. Regardless, it's one of the most distinctive sounds on the modern tenor scene, immediately recognizable, as are his melodic ideas, especially the ascending, staccato-like phrases that he uses to counter predictability.

Sketch might have be a more auspicious return for Schnitter had he augmented the quartet, at least on the three standard tunes, with a chord instrument (piano, vibes, or guitar). For a musician who spent years playing alongside Bill Hardman, Valery Ponomarev, and Freddy Hubbard, it's not surprising that the leader has selected a first-rate, empathetic trumpeter to join him on the frontline. James Zollar not only covers the bases—from Cootie Williams to Don Cherry—but listens to and builds on the ideas of the leader, at the same time abstracting them and inserting humor. Listeners who responded favorably to Ornette Coleman's quartets or to a Wayne Shorter session such as Footprints Live may find Sketch comparatively mainstream and accessible. Others will no doubt grow impatient with the lean textures and polytonal conversations between the two instrumentalists on the eight extended musical sketches.

In sum, for Schnitter fans this album is testimony to his growth and continued musical vitality. On the other hand, if you're new to Dave Schnitter, you may wish to begin by looking for the approximately eight out-of-print albums on which he plays with Art Blakey or is listed as leader. Most highly recommended is the in-print DVD Art Blakey and the Jazz Messengers , a 1976 afternoon concert in Umbria, Italy with Bill Hardman on trumpet. It's some the most honest, heartfelt, creative jazz performed during an era better known for disco music, roller skates, and Creed Taylor compromises.

Track listing: Dili Dali; Sketch; For All We Know; Sooner or Later; All or Nothing at All; Flirtation with Faust; You Don't Know What Love Is; Sputnik

Dili Dali; Sketch; For All We Know; Sooner or Later; All or Nothing at All; Flirtation with Faust; You Don't Know What Love Is; Sputnik