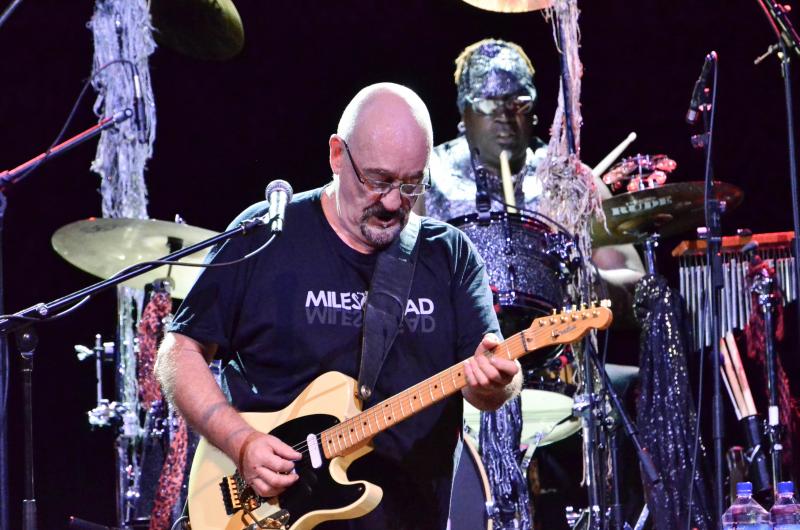 Dave Mason has seen and done it all. He, along with Steve Winwood and Jim Capaldi, co-founded Traffic. He was a member (although briefly) of both Delaney, Bonnie & Friends and Fleetwood Mac, served as a temporary second guitarist in Eric Clapton's Derek & the Dominos and participated in the recording of George Harrison's All Things Must Pass (Apple Records, 1970). In 1971 he formed a duo with Cass Elliot and released their eponymously titled album on Blue Thumb Records. He has also achieved fame as a best-selling solo artist.

The legendary Rock 'n' Roll Hall Of Famer, brought his Traffic Jam show to Huntington, NY's Paramount on a pleasant July Saturday evening. Covering his career with Traffic first, Mason didn't ignore his solo career, and the hits associated with it, as he made certain that that aspect of his career was represented with the classic "We Just Disagree," and the Jim Capaldi-penned, Mason fine-tuned "How Do I Get To Heaven," "Good 2 U" (from his most recent Something Music release, 2014's Future's Past), "Let It Go, Let It Flow" and "Only You Know and I Know."

The performance began with a medley of Traffic music, photos and performance snippets projected on the venue's video monitors. When Mason and his band (guitarist Johnne Sambataro, Tony Patler on keys and bass and Alvino Bennett on drums) reached the stage, the four musicians immediately got down to it, replicating the sound and feel of Traffic. Because Mason is and was part of Traffic's DNA, the daunting task was made infinitely easier. A slow and somewhat meandering version of "Forty Thousand Headmen" opened the show and set the tone for the entire evening. It was going to be a jamming, trippy, dreamy and sometimes psychedelic trip into the past.

Mason, himself, was in a jovial mood. He welcomed the crowd with a chirpy, "How you doing? Nice to be here. Nice to be anywhere, in fact. First we're going to do some Traffic, then we're going to take a little break and we'll do some Dave stuff. What do you think of a little 'Pearly Queen?'" The very rockin' version of the song got many in the audience onto their feet to bop and sing along.

Though the performance was billed as Dave Mason's Traffic Jam, it could have just as easily been titled Dave Mason's Musical Autobiographical History Lesson. The bald and bespectacled Mason announced that he was born on the 10th of May 1946," brushing his hand over his head he added, "sans hairdo." When he continued and mentioned that he was born in Worchester, the monitors flashed to a bottle of Lea & Perrins Worcestershire sauce. At this point Mason stated, "Accept no substitutes." He then proceeded to tell the audience a little about his hometown, the formation of Traffic, how the band met and its history.

"Rock and Roll Stew," featuring Patler on vocals, was up next and the mostly middle-aged crowd ate it up. Throughout the evening Mason continued to provide glimpses into the legendary band while paying tribute to the members who have passed (Capaldi and Chris Wood). These references kept the audience engaged. This also enabled Mason to perform a Traffic song from outside his tenure with the band ("AD," he said, "as in after Dave."). Mason explained that the version of the song that the band was about to perform was in the set list because "I thought it would be a good idea to put it in, because it would probably get requested." He paused and then added, "Since we started doing this in 2013, no-one has requested it. Doesn't matter, we're going to do it anyway. Here's a little arrangement I put together of 'The Low Spark Of High Heeled Boys.'" The Mason-arranged version of the song was bluesier and a tad slower that the well-known version that, to this day, gets classic rock radio airplay.

Before he ended the Traffic set, Mason decided to set the audience straight regarding his British accent, or rather the lack of one. He explained that "not everybody from England sounds like the gecko...besides that I've lived here since 1969." Evidently, it has faded over the years. The first set ended with "Medicated Goo" (with its '60s drenched lyrics and harmonies) and a truly astonishing version of "Dear Mr. Fantasy" featuring an excellent guitar solo by Mason.

The second set focused mainly on Mason's solo work. The first four songs borrowed heavily from the Alone Together (Blue Thumb Records, 1970) and Let It Flow (Columbia Records, 1977)—arguably his "best" solo offerings. "World In Changes" rolled into "We Just Disagree" was followed by "Look at You Look At Me" "and "Let it Go, Let It Flow."

Before switching gears to his more recent solo work, Mason took a moment to mention that "Traffic got inducted into the Rock 'n' Roll Hall Of Fame in 2004. You'll have to come and see me someday, stuffed and mounted like Trigger." He then paid homage to his departed friend, Capaldi, explaining that the duo had toured together in 1998 and subsequently released Live: The 40,000 Headmen Tour (Castle Music, 2002). They had planned to work together on a new studio offering, but Capaldi got sick, eventually succumbing to stomach cancer in 2005. Mason explained that the next song was on the Future's Past album and that the lyrics were originally composed by Capaldi. He said, "The arrangement and lyrics were a bit dark, so I did a little re-crafting." The version of "How Do I Get To Heaven" was poignant, beautiful and haunting as was "Good 2 U," the plaintive song that was also originally released on Future's Past.

Mason also took a moment to talk about the vets and his charity, Work Vessels for Veterans. He explained that the charity used 100% of the donations it receives to help the "men and women who protect our freedom get back to work" and have a future. Mason went on to explain that he was raffling off an autographed guitar and that the proceeds from the raffle would be donated to the cause.

In addition to initial volley of solo songs and the new music, Mason and his band also offered strong versions of "Shouldn't Have Took More Than You Gave," "Only You Know and I Know" and "Feelin' Alright" (a song he wrote while in Traffic). "Feelin' Alright," which ended the second set, came with a story. Mason said, "When I was 19, I wrote this little two chord song. It has just two chords. I was 19. It was 50 years ago. I owe a huge debt of gratitude to this artist who passed away recently." Paying his respects to Joe Cocker, he added, "After he did it, it took on a life of its own. At least 50 more artists did it. I don't do it the way I originally wrote it. This version is much more funky..." He continued and, in a slightly foreign sounding accent that was reminiscent of Saturday Night Live's Hans and Franz, said, "And we dance, ya?!?" The reworked version of the song was very funky and very much unlike Mason's and/or Cocker's version. And, yes, the audience danced.

After a short break (very short, most probably just long enough to catch one's breath and gulp a quick slug of a drink), Mason and his band were back for their encore, The performance of "All Along The Watchtower" owed much more to Jimi Hendrix that to the song's writer, Bob Dylan. In fact, the video monitors flashed to a photo of Hendrix (who during other performances has been known to talk of his friendship with the legendary guitarist). The band rocked-out and Mason provided an amazing guitar solo that would have made his departed friend, Jimi, quite proud. When the song ended, the crowd rose to its feet and gave the four musicians a rousing ovation. Mason and his band stepped forward and took their bows. The lights came up and many of the audience member made their way to the merchandise stand while awaiting Mason, who had promised to meet them and sign CDs, t-shirts and posters following the show.

On this evening, Mason and his friends provided the audience with the best kind of "Traffic Jam" possible—a musical one—that left everyone who attended in good spirits.