The relentless power of the second set--leaving the audience quite possibly more worn-out yet paradoxically more energized than the players--will surely stand out as some of the finest improvised music this city has seen.

Aside from the annual TD Canada Trust Ottawa International Jazz Festival, it's rare that Ottawans get to experience a group that has, for many years, successfully brought together a lifetime's worth of experience into a sound encompassing all that makes jazz what it is in the 21st Century. Local bassist John Geggie brings six shows a years to the city's Fourth Stage—musical high points where artists from near and far are brought together, most often with little to no safety net, for evenings of music that are all about risk, often serendipitous chemistry and occasionally even a little bit of background preparation/rehearsal.

Dave Liebman, who brought his longstanding group to Cafe Paradiso for two sets, shares much with Geggie's philosophy of music created in the moment. But there is a difference. The saxophonist, with a resume longer than a career criminal's rap sheet and including stints working in the 1970s with Miles Davis and Elvin Jones, remains most notable for the three groups—Lookout Farm, Quest and, now, the Dave Liebman Group—that have occupied much of his career as a leader, and a lifelong musical partnership with pianist Richie Beriach that's not as active as it once was but remains special in its creation of a very personal musical language. Liebman is one those musicians who, coming of age in the 1960s and 1970s, views music as a continuum, in which aspects of free jazz, rock, world music, classicism and much more are all signposts along the way, but are there only to provide musicians capable of exploring and blending them with the broadest possible palette.

But by working with regular groups over the long haul, Liebman's view of always looking for the sound of surprise is bolstered by a deep-rooted chemistry. The result is that his groups have always been capable of taking great risks, have been equally secure in the kind of trust in which everyone knows how to respond and react, push and pull—and, many times—drive the music to completely unexpected places, all in the blink of an eye. Liebman's current group has been together since 1991, following the dissolution of Quest, the ten-year collective that recently reformed for a tour and an album, the outstanding Redemption - Quest Live in Europe (Hatology, 2007).

While pianist Phil Markowitz left in the late 1990s—trimming the quintet to a quartet and opening the group up for exploration of the freer, less harmonically dense territories that have always been one aspect of Liebman's multifaceted approach—and the drum chair changed in 2001, when the powerhouse Marco Marcinko replaced Jamey Haddad—guitarist Vic Juris and bassist Tony Marino have been with the group since inception, and the group's discography—most recently Blues All Ways (OmniTone, 2007), which may be the most irreverent and broad-scoped look at the blues ever recorded—reflects an increasingly expansive outlook, based on trust and comfort, but never complacency or predictability.

The group's two sets were, in many ways, a study in contrast. The first set, while not lacking for a moment the energy and expressionism that have become Liebman trademarks, was open-ended but less raucous, while the relentless power of the second set—leaving the audience quite possibly more worn-out yet paradoxically more energized than the players—will surely stand out as some of the finest improvised music this city has seen.

Still, as Liebman dipped back in his songbook to open with his "A Brite Piece," first performed when he was a member of Elvin Jones' group in the early 1970s, the entire group dove in with the kind of immediate commitment and vibrant energy that require most groups a song or two to warm up to. Liebman—one of a very few who makes soprano his main ax—may be one of today's most significant torchbearers for John Coltrane, but his richer, more open tone on soprano, and his distinctive ability to combine staggering flurries of notes with just the right allotment of space, giving even the most extended solo remarkable weight and an unmistakable sense of purpose, have always marked his playing with reference points for the listener attentive to his complex but rewarding musical storytelling. 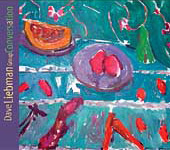 In the previous group Haddad was an undoubtedly versatile player, especially in the area of the world music- inflected rhythms that have also been a part of Liebman's playing since his days with Miles Davis and Lookout Farm, but Marcinko—who spends some of his extracurricular time away from the Liebman group playing in rock bands and Latin groups—has been lighting a fire under the group since their first recording together—Conversation (Sunnyside, 2003). That album remains one of Dave Liebman Group's high water marks, and two tunes were culled from that album for the second set—Juris' fiery and effects-laden "Shorty George," which would have fit comfortably as a more electrified outtake from Pat Metheny's 80/81 (ECM, 1980); and Liebman's "Anubis," which began as a pan-cultural tone poem with Liebman on wooden flute, but quickly became a 5/4 improvisational tour de force with improvised segments meshing seamlessly with sinuous melodies and an in-the-gut riff from Juris and Marino acting as a periodic, potent rallying point for the quartet.

Marino is one of those players who, though he may have stood quietly at the rear of Paradiso's postage stamp of a stage, stoked the engine room with Marcinko while demonstrating solo strength of great beauty, power and dexterity. He's also a fine writer, with his first-set ballad, "Generoso," proving it is, indeed, possible to combine compositional complexity and simple lyricism.

In a group in which, Liebman aside, every member is deserving of greater recognition, It's Juris' lack of larger-scale notoriety that remains the greatest mystery. A contemporary with larger names including Frisell, Metheny, Scofield and Abercrombie, he possesses comparable harmonic sophistication and virtuosity. His Blue Horizon (Zoho, 2004) remains an overlooked gem that's his most personal statement as a leader to date. Criticized by some for its eclecticism, it was that very quality that revealed his encyclopedic knowledge of jazz but also of things farther afield.

In performance, his inestimable technique was but a means to improvisational ends, combining fluent chordal strength with a very personal approach to articulating his distinctive single-note lines that, on record, seem unfathomable, but make perfect sense with the luxury of watching him in performance. From Lenny Breau-like harmonics to gritty, Scofield-esque shades of blue, his ability to create soundscapes with his instrument through the use of a small array of effects, is as personal as Frisell's. And, as he's proven on albums ranging from his more mainstream A Second Look (Mel Bay, 2005) to the jamming live album with drummer Ken Serio, Live...In the Moment (Tripping Tree, 2008), there's an ability, similar to John Abercrombie's, to sound distinctly himself, regardless of the context.

The same, of course, can be said for the entire group, based on the two sets that had an Ottawa audience restricted to a small size only because of the capacity limitation of Paradiso, a jazz club that's doing its best to be a home for local musicians and international artists alike. Both sets were packed, giving great hope that the club can continue to expand its horizons to include more shows of this caliber. Critically acclaimed but popularly undervalued, Dave Liebman has a discography that runs the entire gamut from free jazz to through-composed, complex, rock-inflected improvised music. With Juris, Marino and Marcinko he has a flexible working unit that may operate without a safety net but, based on their two Ottawa sets, creates a whole so profoundly satisfying as to lay waste any claim that jazz is in trouble. This was music of the life- affirming variety, capable of energizing and rendering positive even those suffering through the most troubled of times.