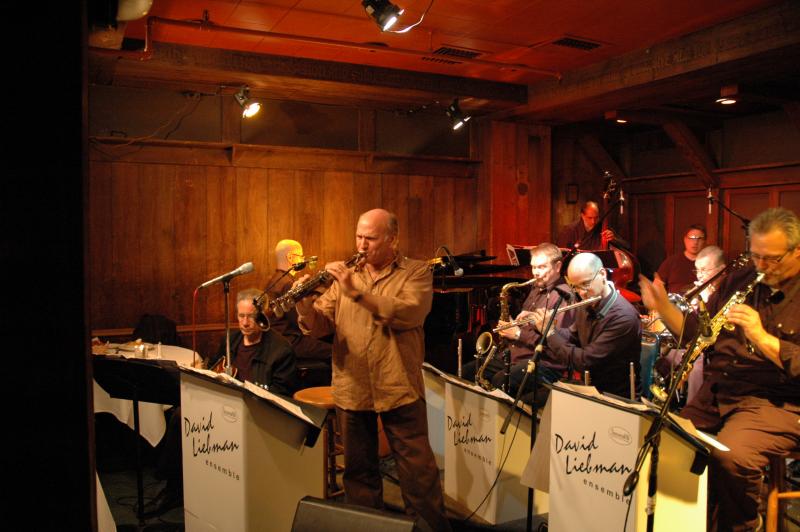 On this night, bringing together some of the best and most creative musicians in the business, the Dave Liebman Big Band exceeded any and all expectations from a large group, in sharp contrast with many which, today, simply offer a potpourri of loud and flashy clichés. Liebman's troops are capable of a great deal more musical inventiveness and subtlety than most of the large ensembles, yet constitute a full eighteen-piece big band, with four trumpets, four trombones, five saxophones/reeds, piano, guitar, bass, and drums, with Liebman upfront delivering the goods on soprano sax and wooden flute. The heartbeat of the band is Liebman's small group personnel—guitarist Vic Juris, bassist Tony Marino and drummer Marco Marcinko. Brilliant and innovative musicians like pianist Jim Ridl and Charles Pillow in a dream saxophone/reeds section, make up a band that was sure to do some interesting and novel things.

At Chris' Jazz Café, the seventeen guys seemed remarkably comfortable, despite being squeezed onto a compact nightclub stage. Perhaps partly on account of the club setting, they were able to integrate the intimate co-improvisational virtues of a small group with the power and possibilities of a big band. They also owed this achievement, in part, to the concise and smart arrangements of Liebman tunes, composed over several decades, and scored for big band by the likes of Andrew Rathburn, the great Vince Mendoza, Tim Hagans, Pete McGinness, and the perennial Jim McNeely. The overall effect deserved comparison with the classic Thelonious Monk Big Band at Town Hall in 1959, where the great Hall Overton provided stunningly compact and beautiful arrangements, with Monk at the piano. When such energies are concentrated in a disciplined yet creative manner, music emerges which is memorable and even historical. This night at Chris—one of the few remaining jazz clubs in the once teeming Philadelphia—there was indeed such a feeling. Without a lot of fanfare, this band raised eyebrows and generated musical ideas which are likely to have a lasting influence.

The set started out with Liebman's "A Brite Piece," written during his early days with the Elvin Jones Quartet. A lively pace and sparse orchestration, along with Liebman's relatively modest improvisations, understated the case. Paradoxically, more heat was generated with Mendoza's rich changes on the balladic "Beyond the Line" which, after a quiet beginning from Liebman on a vertical wooden flute, led to some serious wailing on soprano sax and some rich follow-ups by others, including some brief but strikingly lyrical and all-too-short phrases from Juris. "Little Peanut" served as a paean to Liebman's then baby daughter, Lydia, by now a young woman who does some heady singing of her own. This piece, which started as a cute eight-bar melody, turned out to be a masterpiece of big band ingenuity, evolving—thanks to Tim Hagans' arrangement—into a musical version of a child psychology book, following the little kid around through various moods and playful interludes with clever, even brilliant, exchanges among the alto and tenor saxophonists. Indeed, this version of "Little Peanut" far exceeded those jazz tunes about kids like "Dat Dere" and "Little Man, You've Had a Busy Day," becoming a virtual improvised tone poem with a Monkish flavor.

"As Always" proved to be a beautiful ballad. "Elvis the Pelvis" rocked with light humor, fueled by Juris' so-not-Juris emulation of Presley's guitar, recalling the rock 'n' roll icon's classic body movements—and memorable grunts that passed for words. The set concluded with McNeely's remarkable arrangement of "Sing, Sing, Sing," which verged on a symphonic tour of the swing band era, with all the musicians taking brilliant choruses, and culminating in a Gene Krupa-like drum solo from Marcinko, one of the hottest, most inventive and versatile drummers on today's scene.

Liebman's always impressive brilliance and creativity were further reinforced through experiencing his Big Band live. The performance manifested the saxophonist's well-known ability to bring his groups along with him on his journey— here nurturing the big band modality along the lines of his own unique musicality, while allowing for considerable freedom among his musicians and, in this case, arrangers. Liebman's big band CDs Beyond the Line (Omnitone, 2004) and As Always (Mama Records, 2010) have captured their capabilities on disc. Their unique flavors shone even brighter in person.