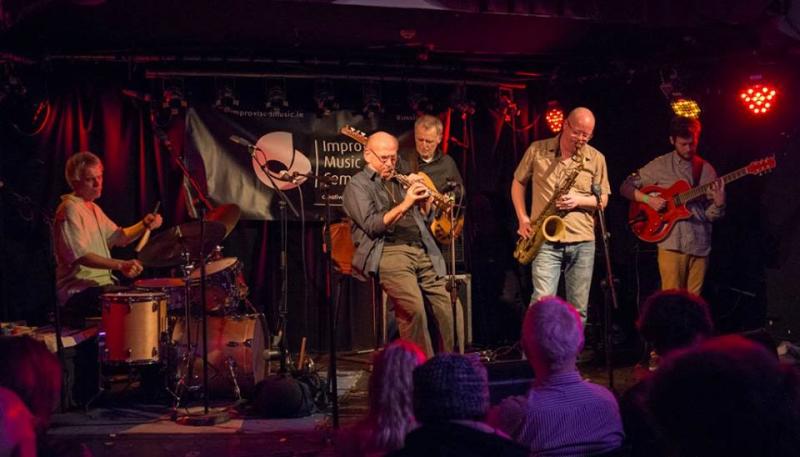 It was a full house at Whelans for NEA Jazz Master Dave Liebman, and, it has to be said, an especially attentive crowd. In fact, the bar of this famous Dublin venue can rarely have had such a quiet evening, during the two plus hours of boldly improvised music. And the relative silence of the crowd throughout the concert was not so much the in-the-church-of-jazz reverence typical of so many concert hall settings—after all, this was a club gig—but rather the rapt response to the blink-and-you-miss-it orchestration of riveting music as it unfolded.

Liebman has been a frequent visitor to Ireland over the years and has developed a close musical rapport with bassist Ronan Guilfoyle over two decades or more. With drummer/percussionist Gerry Hemingway closing the triangle, the trio's immense collective experience in the pursuit of meaningful musical dialog revealed itself in two, near hour-long improvisations of constantly evolving dynamics.

Meaningful dialog for these musicians didn't necessarily equate with easily definable melodies or the standard head-solo-solo-head formats of much jazz; instead, the trio's currency was founded upon intense listening that dictated shifts in leading narrative and supporting lines, collective harmony and dissonance, unaccompanied statements or unison play, boisterous discharge or whispered intimacy, driving grooves or angular abstraction. For the observer, never knowing quite how the story would evolve, yet being seduced by the trio's craft and guile to go along for the in-the-moment ride, made for an intense auditory/visual experience.

Hemingway has been giving solo percussion performances since the mid-1970s and he used an array of sticks and brushes—laid out beside him like a dentist's tool kit—to great coloristic and propulsive effect. Liebman allowed acres of space for all his colleagues to explore, and in fact, the amount of time one or more of the musicians laid out, allowing the music to breathe and grow organically, was an essential element of the interplay. The ability to listen and not play is one of the hallmarks of a good musician, a lesson distilled in Liebman during his early 1970s tenure with Miles Davis.

For the second set the trio was joined by two of Ireland's finest jazz musicians; the internationally established saxophonist Michael Buckley and the rapidly up-and-coming guitarist Chris Guilfoyle , son of Ronan. Chris Guilfoyle made his recording debut on his father's excellent Hands (Portmanteau Records, 2015), where the guitarist provided the perfect foil to David Binney. Chris Guilfoyle also knows Liebman quite well, having studied in the saxophonist's Chromatic Harmony Workshop in Pennsylvania in 2011 before joining Liebman on a short tour of Ireland later that year—dates that also featured Buckley. Suffice it to say, Chris Guilfoyle and Buckley brought additional impetus and greater variation to the mix.

The younger Guilfoyle was particularly impressive, exploiting the guitar's textural/percussive avenues, providing atmospheric sustain beneath the saxophones' compelling to and fro, and veering between intense psychedelic soundscapes and fiery, straight-ahead linearity. With the debut recording of his sextet Umbra due for imminent release, this is a guitarist to watch out for.

A sudden injection of fast-walking bass propelled Liebman and Hemingway to a frenetic flare-up, though just as quickly, a pocket of silence emerged to once more redirect the group's focus, with Buckley's lyrical, melancholy tenor lent strangely sympathetic support from Hemingway's clacking from an unidentified mouth-percussion instrument.

A spare passage of fairly abstract bass and soprano exchange completely altered the atmosphere, ushering in a guitar improvisation that grew from hushed beginnings to a confident flow that drew Liebman into the orbit, leading to a heady ensemble charge. The easiest course, perhaps, would have been for a sustained free-for-all, but the group dynamics shifted fairly constantly throughout the set; even at the music's most intense heights there was always a sense of communal discipline, with Ronan Guilfoyle more often than not the fulcrum on which the quintet turned this way and that.

A spacey, dream-like sequence ensued, with flute and tenor saxophone locked in a slowly circling mantra; gradually, the quintet aligned for the evening's most extended lyrical exploration, with Ronan Guilfoyle's highly expressive improvisation the centrepiece. This, the evening's meditative sweet spot, was soon ruffled, first by Hemingway's unaccompanied bustle, and then by the quintet's loose yet spirited collective animation. A punchy unison motif—perhaps the only segment of the evening that sounded pre-configured—made for a stirring finale. For the encore, Ronan Guilfoyle led a slow, blues-tinged ballad of real delicacy.

This Dave Liebman concert—an Improvised Music company production—was proof positive that free-jazz/improvised music, at its best, is less to do with untethered honking, screeching and battering, and everything to do with a deep-rooted musical communion that embraces the individual voice within the collective, whilst never shying from the spirit of adventure.