Dave Douglas and the Art of Festival Direction 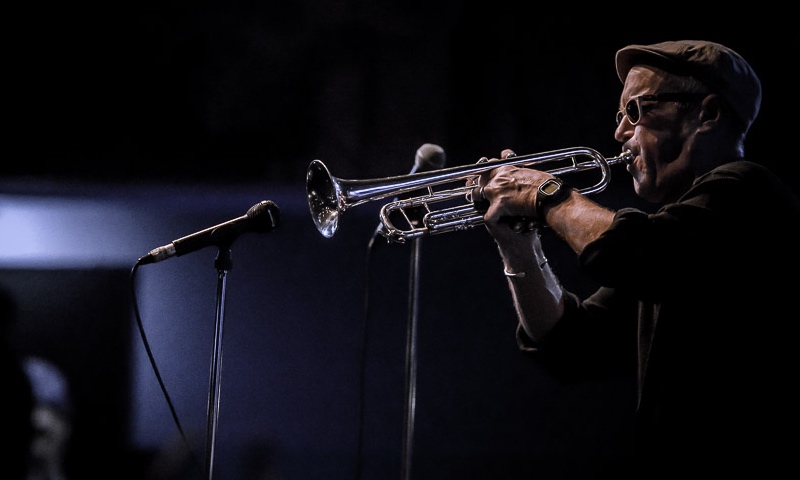 By LIBERO FARNè
March 18, 2017
Sign in to view read count
Dave Douglas' fame as a forward looking musician is well-known. His contribution to today's music scene, however, is not limited to his playing. Besides having pioneered in 2005 a unique model of musician-run label with the progressive Greenleaf Music, he has been artistic director of the Banff Workshop in Jazz and Creative Music from 2002 to 2012 and he is a co- founder of the Festival of New Trumpet Music which started in 2003. Since 2016, Dave Douglas has been the artistic director of one of the most remarkable and well-established Italian Jazz Festivals, the Bergamo Jazz Festival, near Milan. The 39th edition of the festival will be held from March 19-26 2017 and will feature the likes of Bill Frisell, Ernst Reijseger Regina Carter, Marilyn Mazur, Melissa Aldana, Enrico Pieranunzi, William Parker and many more. In this interview Dave Douglas tells us about his vision as artistic director and divulgator of improvised music.

All About Jazz: As the artistic director of Bergamo Jazz Festival what are your goals and vision?

Dave Douglas: The most important goal for me is to ensure the best use of the spaces which are available to us. Of course, Teatro Donizetti is a gorgeous theater, so I feel it is so important to program music that will sound great in that space. But it has been an important idea to grow the festival into new spaces around town. Again, whether it in a library or a convent, to find the right sound for the space is the goal. Sound is everything.

Beyond that, I feel it is important to try to capture as much of the breadth of creative activity in the current music as we can. It is a jazz festival, and it's important to remain aware of all the different paths the music coming out of jazz has taken.

AAJ: You are also the director of the Festival of New Trumpet Music. What are the differences and similarities between these two Festivals?

DD: These two situations are very different. First of all, the Trumpet Festival mandate is to commission music by present trumpeters in every facet of the music. It is not a jazz festival. Rather, it is a festival which supports the community and the culture of the practice of the instrument. As such, we only present trumpet-focused projects. With Bergamo, it is a jazz festival, and the idea is the broadest sample of music and musicians. Also, in the case of Bergamo, there is the generous support of the city and the theater, which is quite an important piece of what we do.

ADVERTISEMENT
AAJ: In the last ten years two other trumpet players, Paolo Fresu and Enrico Rava, have been appointed artistic directors of the Bergamo Jazz Festival. Is it just a coincidence or do you think that there can be some real reasons behind this choice?

AAJ: In organizing the festival's programme did you receive suggestions, requests, or even pressures by musicians, managers, politicians...?

DD: I welcome the suggestions. It would be foolish to think that I alone know. So I balance everything that I hear and all the proposals I receive. The most difficult part is having to choose which worthy projects I have to say 'No' to. That is always a disappointment for me. The overriding goal is a balanced, interesting, and diverse festival. With the right music in the right spaces.

AAJ: For many reasons today many jazz festivals present also rock, pop music, Brazilian music... and so on. This doesn't happen in Bergamo: is it a precise choice?

DD: Yes, I feel that in Bergamo there is a sense of cultural curiosity. The sense I get from everyone involved, at every level, is of wanting the highest level of music and a profound curiosity about new developments and new sounds. As well as a willingness to go deeper into the meaning of the music we may already know. What is the meaning of what we present, and why do we present it? This is what I mean by cultural curiosity. In taking this job, I did ask some questions around this topic. I feel the attitude is very warm, open, and generous. I am grateful for that.

AAJ: ...But how do you define jazz today?

DD: Given the option, I would not attempt to define jazz today! The definition of jazz is in the hands of all the musicians who play it.

AAJ: Are there some groups or musicians that you would have liked to invite, but you couldn't? If so, why?

DD: There are always groups I would like to invite and cannot. Sometimes it is due to scheduling conflicts. Sometimes I find out that they have already played at the Bergamo Jazz Festival before. Sometimes I am not able to match their sound with an appropriate space. For many reasons, this is always a big puzzle, trying to find the right balance in every way. For example, another area I thought was important was to increase the participation of musicians from the region where the Festival takes place. This year we will be hearing that. I can't wait!

AAJ: As a musician, which are the festivals around the world where you prefer to play?

DD: Oh, so many! My favorite, as you probably know, is Suoni Delle Dolomiti, in Trentino, Italy. But there are great spaces everywhere. In Seattle, in Portland. In London, San Sebastian, Warsaw, Porgueroles. I could go on and on... Just last month I played in Bismarck, North Dakota with my band High Risk. It was a wonderful surprise!

AAJ: Do you feel differences between the US audiences and European audiences? And what about the different environments (festivals, clubs, colleges...)?

DD: There's a big difference between American and European audiences. There's a big difference from country to country within Europe and from state to state in the US. I would say the biggest difference we feel from the stage is the level of participation from the audience. That feeling changes from city to city, from venue to venue. There is also the matter of language—if one can speak the local language there can be a great connection. And vice versa, sometimes I find that if I cannot speak the language there is another alchemy that happens. It's our job to transmute that energy into great music and great art.

AAJ: Do you prefer to play in great festivals or in smaller clubs? Among these ones in your opinion which are the best ones?

DD: I have to say quite honestly that Teatro Donizetti is one of my favorite theaters to play. As far as clubs are concerned, there are great clubs all over Italy. To be at home, I prefer the Village Vanguard.