Dave Davies at The Space at Westbury 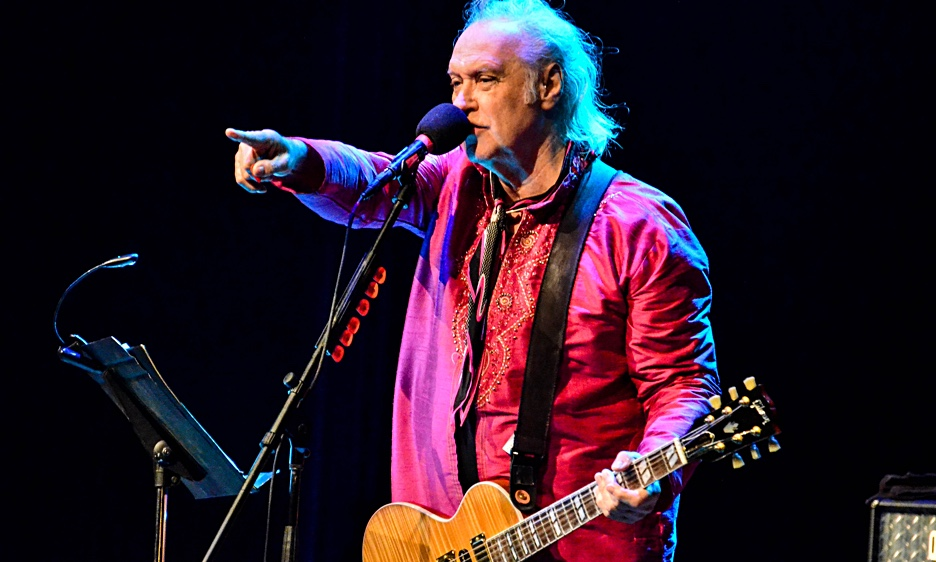 By MIKE PERCIACCANTE
May 4, 2019
Sign in to view read count
Dave Davies
The Space at Westbury
Westbury, NY
April 14, 2019

Rock 'n' Roll Hall of Famer Dave Davies is best known as the co-founder and lead guitarist of the Kinks. Davies founded the Kinks with bassist Pete Quaife in 1963. Davies' brother, Ray, joined soon after as the rhythm guitarist. The band's original line-up was completed when drummer Mick Avory was added. Ray Davies soon became the band's acknowledged leader, chief songwriter and lead singer. Dave Davies contributed to the band as occasional lead singer and as writer or co-writer of a number of Kinks tunes (most notably "Death of A Clown" and "Living On A Thin Line"). Dave Davies is the architect of a guitar sound that features distortion as well as melody. This playing style has influenced many punk, grunge and metal guitarists. In short, Davies' classic sound has revolutionized rock 'n' roll.

Dave Davies is also known for his tumultuous relationship with Ray Davies. The brothers have been known to quarrel and occasionally have fist-fights on and off stage. Dave Davies published an autobiography, Kink, (Hyperion Press, 1996) in which he discussed his life, loves, career and the tense professional relationship with his brother with regard to the direction of the Kinks.

Davies is also a survivor. He continued his career, as a bona fide solo artist, when the Kinks went on hiatus in 1996 after touring following the release of 1994's To The Bone (Grapevine/Konk Records) album. In June of 2004, he suffered a stroke while doing publicity for his album, Bug (Koch Records, 2002). By 2006, Davies had recovered enough to be able to walk, talk, sing and play the guitar.

As a member of the Kinks, Davies has had his hand in the creation of many of the world's best loves songs including: "You Really Got Me," "All Day and All of the Night," "Lola," "Tired of Waiting For You," "Waterloo Sunset," "Come Dancing," "Where Have All The good Times Gone," "David Watts," "Better Things," "Destroyer," "Dedicated Follower of Fashion," "Victoria," "Celluloid Heroes" and many others. As a solo artist, Davies has released a large number of singles and over 20 studio and live solo albums. His most recent CD is Decade (Green Amp Records, 2018).

On a pleasant mid-April Sunday evening in Westbury, NY, Davies and his band touched down at the Space at Westbury concert venue. Davies' current band is a power trio featuring drummer Dennis Diken (of Smithereens fame) and bassist David Nolte. Prior to when the band appeared on the stage at approximately 8:15pm, the venue was abuzz with anticipation. Fans were heard discussing the possible Kinks reunion that had recently been bandied about in the press. Small groups had formed around the merchandise table and near the bars where the members of these troops were discussing the band's last performance, just two days before, (in New York City at the Concert Hall for the NY Society of Ethical Culture) as well as what Kinks' nuggets Davies might play on this evening.

The concert began with Davies and the band performing the Kinks classic "Till The End of The Day" followed by "I Need You." Davies then took a moment to thank the audience for turning out. He then told a short story to introduce the tune "Creepin' Jean." When he counted down to the intro, Diken started playing and then stopped. He smiled and stated, "Wrong song...sorry!" Davies, Nolte and the audience all chuckled. Davies smiled and said that Dennis "has been playing with too many people." With that, he cackled and the band began to play the song. During the song, a fan threw about 10 pairs of panties onto the stage in the general direction of Davies. The guitarist was amused and made a few comments about the undergarments while, occasionally, using them as props throughout the rest of the set.

ADVERTISEMENT
Highlights of the performance included a large number of well-known Kinks tunes with a few obscurities thrown in and a happy smattering of his solo catalogue. "Tired of Waiting For You" (on which the audience sang along), "Susannah's Still Alive," the new song "Cradle To The Grave" from Decade, as well as "See My Friends" "Strangers," "Too Much On My Mind" "Young And Innocent Days" (prior to which he paid tribute to his brother Ray), "Death of a Clown," "Living on a Thin Line," and finally "All Day and All of the Night" , all of which made their appearance in the main set.

During the performance Davies, Diken and Nolte fed off of the energy generated by the crowd. The trio was beaming and clearly exhilarated by the welcoming, ecstatic and elated audience. They didn't leave the stage prior to the encores. Davies took a few moments to again thank the audience before launching into an incredible version of The Kinks' "I'm Not Like Everybody Else" followed by a rocking and revved-up version of "You Really Got Me" that knocked it out of the park and had every member of the audience out of the seats on his or her feet.

At the end of the encores, Davies again thanked everyone for coming to the show. The band took its bows and left the stage while the cheers continued and grew louder even after the venue's lights came on. As many of fans left the venue, quite a few were seen at the merchandise stand purchasing t-shirts, albums, CDs and other memorabilia while hoping that Davies would appear to sign autographs.

The performance was fantastic, tight and fun. In addition to Davies' stellar guitar work, an additional highlight of the evening was his good cheer, and his interaction with and genuine affection for the audience members. It was obvious that both Davies and his band were having fun. The three musicians spent the evening smiling and playing their hearts out. Davies was in fine form playing beautifully and with precision singing powerfully. The only evidence of the fact that he just turned 72 years of age and of his past health issues, was the occasional reliance on the lyric sheets placed on the music stand to his right and the intermittent strain heard in his voice on a few of the high notes.