By JACK BOWERS
January 3, 2013
Sign in to view read count
Composer / pianist Roberto Magris roams far afield on this seductive two-disc set, leaving his native Italy to record in Kansas City, MO, and using as his premise the bewilderment of aliens who encounter bebop, apparently for the first time, after arriving on planet earth (or "planet jazz"). What the aliens chance upon, in fact, transcends bebop, as Magris makes them feel "at home" with a variety of exotic themes that range from swing to "free" jazz and whose moods and cadences hint from time to time at the possibility of some far distant origin. Always, however, there is an explicit bebop substructure, one on which even aliens can depend.

Magris' accomplices in this endeavor include tenor saxophonist Matt Otto, bassist Dominique Sanders and drummer Brian Steever, with percussionist Pablo Sanhueza added on ten tracks, vocalist Eddie Charles on "Aliens," "New Cos City" and "Nobody Knows." The leader's piano is heard alone on the opening "Blues Clues," and with Otto's tenor on "Cloud Nine." Otto, a new name here, is a laid-back bopper whose tone and temper are reminiscent of Brew Moore / Allen Eager / Warne Marsh with a touch of Stan Getz. Magris wrote thirteen tunes and most likely arranged everything. Rounding out the engaging program are Fats Navarro's "Nostalgia," Billy Reid's pop favorite from 1947, "The Gypsy," Kenny Clarke's "Nobody Knows," John Coltrane's "Giant Steps" and "Robbin's Space Bolero," easily noted as Sir Sir Charles Thompson's classic "Robbin's Nest." The last nineteen minutes on Disc 2 comprise an "audio notebook," akin to spoken liner notes, which summarize everything you need to know about the album after you've already listened.

What should be of paramount interest to anyone who has positioned the recording on his or her radar screen is the fact that Magris covers a variety of styles and plays well in all of them, as do Otto and the others. As for Chambers, he's a wordsmith in the mold of King Pleasure or Eddie Jefferson, to name a couple (he sings on two numbers and "talks" on "New Cos City"). Magris strings together a number of well-known bop phrases on "New Cos City," and swings as earnestly as any bopper on that number, as well as on "The Gypsy," "Cosmic Storyville," "Nostalgia" and the Latin-centered "Chachanada." The rhythm section, also faced with the task of mastering a number of blueprints, has no problem adapting its outlook to suit each revision.

A picturesque and perceptive voyage across the jazz landscape for aliens and earthlings alike. 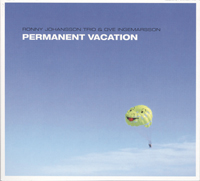 Ronny Johansson, a world-class pianist from Sweden who plays with deceptively youthful enthusiasm and power, is no young lion; far from it, in fact, as he has played an important role in the music scene in his home country (and elsewhere) for more than half a century (with no perceptible sign of slowing down). Johansson is clearly at the top of his game on these CDs, which were recorded two years apart: New Jubilee in 2012, Permanent Vacation in 2010, both with his working trio, bassist Yasuhito Mori and drummer Raymond Karlsson. Tenor saxophonist Ove Ingemarsson adds his singular voice to five numbers on the earlier session.

All of the songs on both CDs were written and arranged by Johansson, whose bright and lyrical compositions mirror closely his approach to the keyboard. As a soloist / accompanist, he brings to mind another Swedish master, Jan Lundgren, and there aren't many compliments more lavish than that. It could be said without rebuttal that Lundgren has actually followed in Johansson's footsteps, as Ronny got there first. Whatever the case, there's no denying that Johansson and Lundgren are extraordinary pianists who excel at writing and whose import has been enormous. If you're a Lundgren fan, and there are many throughout the world, you'll certainly appreciate what Johansson brings to the table.

Johansson has two more things going for him, namely Mori and Karlsson, whose seamless back-up work anchors the trio securely and helps raise it to a consistently impressive level. Johansson most often writes with themes in mind, as the songs on both albums affirm. On New Jubilee, for example, "My Japanese Heart" extols the trio's tour of Japan in 2010, while "My French Heart" recalls an evening at the Blue Note in Paris where Johansson saw and heard Bud Powell and Victor Feldman perform. "Hope" was written in the wake of the tsunami that devastated parts of Japan, "Aries" for Johansson's wife, Ulla. "Piano Noir" is a play on words (pinot noir, anyone?), "See You" a brief essay for solo piano.

The same holds true on Permanent Vacation, wherein Johansson's graceful melodies are given added color by his longtime friend and colleague, Ingemarsson, with whom he has recorded before. "Thanks HSM and Goodbye" and "Permanent Vacation" apparently refer to Johansson's retirement after thirty-four years of teaching piano, most recently at the State College of Music in Goteborg. While "Raymond on the Bike" remains unknown, he seems to be having a marvelous ride, something that holds true for the listener throughout both these splendid albums by one of the most accomplished trios you've probably never heard.

Tracks: Wednesday Came to a Crossroads; Some Characters and Incidents are Fictitious; Interlude I; Salt Water Rocket; Interlude II; Thought and Memory; Gunslinging Bird; Interlude III; Better Get Hit in Your Soul.

Tracks: Blues for Bonnie Belle; How 'Bout Now; Speak to Me; Chutes and Ladders; Finding the Evidence; Psalm to Hymn.

Our Path to This Moment

Tracks: Our Path to This Moment; Rise and Fall; It's You or No One; Kunlangeta; The Promise; Jessie's Song; Wayfaring Stranger.

Aliens in a Bebop Planet

Tracks: CD1: Blues Clues on the Lunar Sand; Across the Borders / Beyond the Faith; A Night in Cydonia; Nostalgia; On Cloud Nine; Sat; Robbin's Space Bolero; Aliens in a Bebop Planet; Chachanada. CD2:New Cos City; Signals and Prayer; The Gypsy; Nobody Knows; Cosmic Storyville; Giant Steps; Rhythms from the Floating Space; On Cloud Nine (duet); Saturn Sun Ra; Audio Notebook.