By JACK BOWERS
January 3, 2013
Sign in to view read count
There was a time when most big bands based their persona on a handful of proven and predictable ingredients: tempestuous rhythms, formidable ensemble passages, screaming shout choruses. You could always be sure that Count Basie, Woody Herman, Stan Kenton or Buddy Rich would find more than one way to shake you out of your cozy seat and set your toes to tapping. That was then; this is now, when most bands are built along the lines of saxophonist Fred Hess's well-bred Colorado-based ensemble: able to swing hard when necessary but as a rule more closely attuned to the nature and subtleties of contemporary themes than their swaggering predecessors.

For Speak, his third big-band recording and sixteenth over-all, Hess has written and arranged five engaging tunes to accompany guitarist Tommy Walker's eloquent "Speak to Me" (which Hess also arranged), and has buttressed the ensemble by enlisting the sizable talents of trombonist John Fedchock who once wrote for and played in one of Woody Herman's celebrated Herds. Back for a third go-round is the versatile drummer Matt Wilson who keeps the rhythm section on its toes from beginning to end. Brass and reeds are earnest and attentive, working together like a well-oiled machine.

Fedchock solos nimbly on the genial opener, "Blues for Bonnie Belle" (named for Hess's pet dog), again (with trumpeter Alan Hood and alto John Gunther) on "Finding the Evidence" (inspired by a well-known piece by Thelonious Monk) and on the rapid-fire "Psalm to Hymn." Although Hess doesn't say so in the liner notes, the tenor solos on "Bonnie Belle," "Speak to Me" and "Psalm to Hymn" are presumably his, as no one else is mentioned. Tenor Peter Sommer steps front and center with trumpeter Ron Miles for persuasive solos on "Chutes and Ladders." "Psalm," the album's most expansive essay at 16:36, is a tribute to John Coltrane's "modal period," which to many is synonymous with his "discordant period." While Hess nods briefly to that (immediately following Fedchock's virile solo), the "Psalm" is for the most part decidedly straight-ahead and swinging, embodying assertive statements by Hess, Wilson, Gunther and pianist Marc Sabatella. Wilson, trombonist Nelson Hinds and alto Wil Swindler's Elevenet solo strongly on the kaleidoscopic "How 'Bout Now."

Of his three big-band recordings, Hess says Speak is "the best yet." No one here intends to argue the point, which is clearly a matter of opinion, albeit from someone whose viewpoint should be respected. What can be said is that the album stands securely on its own and is a worthy successor to the first two, Hold On and Into the Open. For those who are conversant with Hess's music, no more need be said; for those who aren't, check it out. 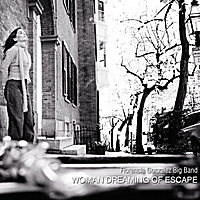 Woman Dreaming of Escape is a splendid debut recording by Uruguayan-born saxophonist Florencia Gonzalez' New York-based big band, replete with engaging melodies and authentic rhythms, from South America and elsewhere. Gonzalez formed the band in Boston in 2007 and moved it to New York City four years later, after it was named one of the five best bands in the Boston area. While the membership has, presumably, undergone some changes, those who perform on Woman Dreaming prove quite capable of assimilating Gonzalez' elaborate and forward-leaning charts, among the more raveled of which is "Miniatura Cromatica," a bow to the music of Bela Bartok and Gustav Mahler that, in Gonzalez' words, "visits the 12 tones, making them one by one the centers of small universes"—meanwhile giving the listener a lot of sustenance to chew on.

Gonzalez' other compositions are far more accessible (and melodic), starting with the lyrical curtain-raiser, "Hurry," and including "Woman Dreaming of Escape" (an "abstract tango" inspired by Stravinsky, Osaldo Puliese and Joan Miro), "Chacarera for Greg," "Candombe Estirado" and last but not least, "DEFG Blues," variations on a theme written by Bob Brookmeyer for the Thad Jones—Mel Lewis Orchestra in the '60s. The graceful "Chacarera," Gonzalez notes, "is deeply influenced by the music of two female composers: Paule Maurice and Maria Schneider," while "Candombe Estirado" (literally, Stretched Candombe), introduced by drummer Franco Pinna, "is a tribute to Duke Ellington," she writes, "his crazy harmonies, the darkness of his music and his Africanisms, and to the Africanisms of [her] own country." The Brookmeyer-influenced "Blues" is a chromatic theme in which Gonzalez took a tone row and built the entire piece "based on this row, from the bass line to the harmony, voicings, etc."

Ample room in each of her compositions is reserved for improvisation, primarily for woodwinds (Gonzalez herself is a saxophonist, although she doesn't play on the album). Another Gonzalez, Sofia, is one of three flute soloists on "Chacarera" (the others are Susanna Quilter and Art Felluca). Felluca, on clarinet, is the featured soloist on "Miniatura Cromatica." Guitarist Diego Porchile shares solo space with tenor saxophonist Andrew Halchak on "Hurry," with pianist Andrew Washburn and alto Nick Brust on "Woman Dreaming." Others who take their turn in the spotlight are trumpeters Chris Kottke and Greg Marchand, tenor Andy Voelker, trombonist Tim Schneier and drummer Pinna, each of whom is proficient and technically sound.

Even so, Woman Dreaming is in most respects a showcase for Gonzalez' ultra-modern compositions and arrangements, and she doesn't disappoint. As another flag-bearer in the ranks of such avant-garde writers as Schneider, Carla Bley, Hazel Leach, Christina Fuchs and others, Gonzalez has made the sort of remarkable beginning that presages a bright and productive future. 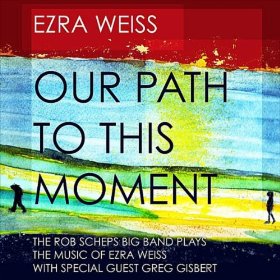 On his first recording as leader of a big band, Oregon-based composer / arranger Ezra Weiss epitomizes "contemporary" in the best sense of the word. It helps, of course, to have an ensemble as proficient as that supervised by saxophonist Rob Scheps and a guest artist of the caliber of trumpeter Greg Gisbert to interpret and enhance Weiss's elaborate charts. Weiss wrote five of the seven numbers to complement the standard "It's You or No One" and the well-traveled spiritual "Wayfaring Stranger," on which Gisbert frames an engaging solo (as he does on "Our Path to This Moment" and "Rise and Fall").

Besides composing and arranging, Weiss plays sparkling piano on "It's You," the melodically lustrous "Kunlangeta" and graceful "Jessie's Song," written for his wife. Scheps solos as well, and robustly, on soprano ("Our Path") and tenor sax ("It's You," "Wayfaring Stranger"). Trombonist Craig Hilton and Tomas Phillips is showcased on "Kunlangeta," while baritone saxophonist Robert Crowell spars with Gisbert on "Rise and Fall." Other soloists of note are trumpeter Paul Mazzio ("It's You"), alto David Valdez and pianist Ramsey Embric} ("The Promise"), tenor Scott Hall ("Jessie's Song"), drummer Ward Griffiths and conguero Chaz Mortimer ("Wayfaring Stranger").

Even so, it is Weiss's burnished arrangements that entice the ear, as he paints a series of entrancing sound-pictures that are progressive in nature while well-grounded in the musical essentials: melody, harmony and rhythm. Our Path to This Moment embodies one more forward step for contemporary big bands, one that is remarkably engaging by any measure. 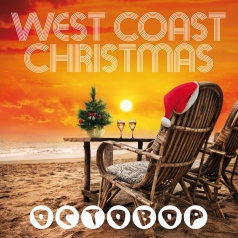 What would the Christmas season be without music? Much less festive, that's for sure. And even without the snow and ice, that's as true on the West Coast as it is on the East. Out in sunny California, baritone saxophonist Geoff Roach's Octobop is spreading seasonal cheer with a new CD, West Coast Christmas, on which clever arrangements of holiday favorites help brighten the landscape. In keeping with its West Coast provenance, Roach's eight-member group has "borrowed" from such peerless role models as Gerry Mulligan ("Line for Santa," "Bernie's Bells") and Shorty Rogers ("Saturnian Sleigh Ride," based on the Leroy Anderson classic) to enhance the holiday mood.

Roach arranged those numbers to complement charts by guitarist Jack Conway (six), bassist Brian Brockhouse ("Angels We Have Heard on High") and trumpeter Randy Smith ("Carol of the Bells"). "Line for Santa" blends passages from Mulligan's "Line for Lyons" with "Santa Claus Is Coming to Town," while "Bernie's Bells" is an amalgam of "Bernie's Tune" and "Jingle Bells." There is at least one lesser-known tune, "Filho de Papai Noel," and at on the pre-release copy, "God Rest Ye Merry, Gentlemen" is listed as "Jerry Mendelbaum." Both were arranged by Conway, as were "Santa Baby," "Christmas Time Is Here," "It Came Upon a Midnight Clear" and "The Christmas Song."

This is the fifth album by Octobop, which is no doubt comfortable in a recording studio. The ensemble plays well together, and solos are by and large passable, even though it's clear there's no Mulligan or Rogers in the neighborhood. On the other hand, the playing time is less than thirty-eight minutes, rather unsuitable for a present-day compact disc, which prospective listeners should keep in mind. A smooth, easygoing session for those who are looking for some Christmas music that is slightly off the beaten path. 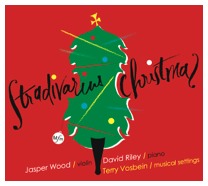 For music that is even more out of the ordinary, there's Stradivarius Christmas, on which violinist Jasper Wood teams with pianist David Riley to offer elegant interpretations of seasonal staples with "musical settings" (arrangements?) by Terry Vosbein, who is well-known to followers of big-band jazz for a pair of impressive albums with the Knoxville Jazz Orchestra, Progressive Jazz 2009 and Fleet Street (songs from the Broadway musical Sweeney Todd.) Although no biographical information is given on the CD jacket (and there are no liner notes), Wood is from Canada, Riley (a professor at the University of Oregon) may also be Canadian by birth, and the duo has recorded at least one earlier album, Stravinsky: Works for Violin and Piano.

Wood may indeed be playing a Stradivarius, but it makes little difference. What matters is that he is a virtuoso on the instrument, as is pianist Riley, and that they play marvelously (and flawlessly) together. As for the program, it encompasses sixteen holiday evergreens from "O Tannenbaum" to "Auld Lang Syne" with stops in between for such well-known hymns as "We Three Kings," "Angels We Have Heard on High," "It Came Upon a Midnight Clear," "O Holy Night" and "God Rest Ye Merry, Gentlemen." Less often heard (but no less charming) are "I Wonder as I Wander," "Bring a Torch, Jeanette, Isabella," "Fum Fum Fum," "What Child Is This" and "O Come O Come, Emmanuel." On the "jazzier" side, Wood and Riley have some fun with Vosbein's light-hearted "Christmas Rag."

For holiday parties, this is familiar yet beguiling music fashioned to make everyone feel at home. Apart from that, it is superbly planned and performed, with crystal-clear sound adding to its allure. No jazz, simply beautiful music to enhance the Christmas season. 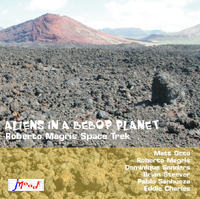