Dave Brubeck: All in Good Time

While acknowledging his achievements as a musician and composer, the BBC award also recognized that Brubeck's impact has spread beyond his own music.

In July, veteran jazz pianist Dave Brubeck performed by television broadcast from New York while the BBC Orchestra played along in London. This unconventional performance celebrated the Lifetime Achievement Award bestowed on Brubeck by the BBC. "I did something similar with Count Basie and Ellington in the 60's, with telephone wire," he explains to me in a gruff, raspy voice, also via telephone wire, from his home in Connecticut. "It was the first time anything like that had been done!"

Innovation is Brubeck's stock and trade. As a young musician, his oddball approach baffled even jazz's most forward-thinking artists. "Stan Kenton and Bennie Goodman came up to me after a gig and said 'What's going on here? Where did you learn to play these voicings?'" His complex, polyrhythmic style found sanctuary in West Coast jazz, a scene characterized by a more thoughtful, composition-based sound as opposed to the hot, hard bop of New York. In the Fifties, West Coast jazz rose in stature, with Brubeck emerging as its chief proponent and gracing the cover of Time Magazine in 1954 as "Man of the Year."

Although he and his trio found considerable success, it was Time Out, recorded with his Quartet in 1959, which marked him out as one of jazz's greatest innovators. Consisting wholly of original compositions, many in audacious time signatures like 5/4 and 9/8, Time Out was unlike any other jazz record of the era. "I hadn't told Teo Macero or anybody at Columbia Records what I was up to. I just started recording. Some of the engineers were impressed, some didn't know what was going on!"

The Quartet had clearly struck oil, but they had to battle with Columbia to get the album released. "It had a lot against it," Brubeck recalls. "At first the label weren't sure. They had never released an album of originals. You had to mix it with standards. You had to be able to dance to it too, and you couldn't dance to those tunes."

One person who did get behind the album was Goddard Lieberson, then president of Columbia Records. "When he heard "Blue Ronda" and "Take 5" he said; "Dave this is fantastic! I want everyone to hear it." He fought to convince the marketing guys, and then the disc-jockeys started playing it, and the label woke up". "Woke up" is probably an understatement. They must have jumped out of their shoes. Time Out sold over a million units, the first instrumental jazz record to do so, and the single "Take 5" soon became the most famous jazz tune of all time. "I still hear it everywhere!" Brubeck laughs. "In movies, in Africa, everywhere..." 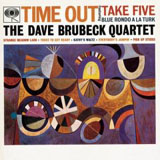 Over the next decade The Dave Brubeck Quartet toured the world, from University colleges to dance halls. They won Downbeat's reader's poll five times; topped Billboard's in '65 and '66; and won Playboy's for eleven consecutive years, from '57 to '68. How did it feel being the most famous man in jazz? "I really didn't think about it in those terms. I was just doing what I wanted to do, which was what I'd been doing for years. I wasn't trying to play what was popular. I was just interested in developing rhythmically and harmonically."

While acknowledging his achievements as a musician and composer, the BBC award also recognized that Brubeck's impact has spread beyond his own music. He was vocal in the fight for social equality in the 50's and 60's, refusing to play for segregated audiences or to drop black bassist Eugene Wright despite pressure from television companies to do so. And in recent years he has been actively involved in The Brubeck Institute, which trains, supports and prepares young musicians for their professional futures. It's a delicious irony, considering the young Brubeck was only allowed to stay at music college on the condition that he never teach piano, so bad was his sight-reading.

In person and on paper, Brubeck is an intriguing bundle of contradictions: serious, yet in conversation funny and often surreal; classically trained but a musical maverick; and a quirky loner who won jazz's biggest audience. He is also a deeply religious man, converting to Catholicism in 1980 in an attempt to heal lasting emotional wounds sustained when liberating the concentration camps in World War II. After 87 eventful years, as a musician and a human being, does the great innovator think the world has moved forward? "Things are better than they were," he admits, "but it isn't over yet."