By GEANNINE REID
February 9, 2014
Sign in to view read count 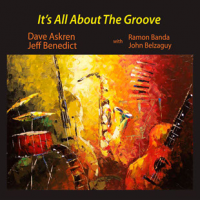 Guitarist Dave Askren and Saxophonist Jeff Benedict have teamed up as co-leaders to form an ensemble that explores six standards and four originals with a CD entitled, It's All About The Groove. With Askren and Benedict forming the nucleus of the project, they are joined by drummer Ramon Banda and bassist John Belzaguy. The title of the CD is more than just a likable slogan; for Askren it is the "groove" that holds the backbone of all good jazz and the goal of the entire project.

Askren graduated from Berklee College of Music in Boston and was hired to teach guitar soon after graduation, he also studied with the great pianist/teacher Charlie Banacos and saxophonist Jerry Bergonzi. This and more Askren conveys on It's All About The Groove; following his critically acclaimed releases: Re: Bill Evans (2002), Some Other Things (2005), and Trio Nuevo + (2008). Benedict has been playing professionally since the age of 14 and since 1989 has served as a Professor of Music at California State, Los Angeles. Known for his technical prowess and meticulous professionalism, Benedict has gained equal traction in both jazz and classical idioms. In the latter capacity, he performs regularly with the Orion Saxophone Quartet, which he founded, and has played with some of the world's most renowned orchestras as a soloist. Benedict has recorded two CDs as a leader—Castle Creek Shuffle and Standard Fare,—for the Resurgent Music label. Benedict has won four 'DeeBee' awards from DownBeat magazine for Best Instrumental Jazz Soloist, Best Original Composition and Best Classical Chamber Music Group.

It's All About The Groove visits a number of "grooves," from bebop to swing to funk, to a walking New Orleans second line on "Holmes," a Kansas City shuffle feel for "Old Folks" and soul-jazz on "McCannism." The ensemble is able keep it all together by building around the central idea of keeping a consistent energy and flow through each style as a unit. It's All About The Groove shuffles tempos and styles, while alternating between original and standard compositions from both Askren and Benedict.

Starting with Nat King Cole's "Nature Boy," played as a relaxed slow- mid tempo swing with an open guitar-bass vamp, which takes us into the modal territory explored by later Coltrane, Benedict's alto solo is a clear statement of flowing improvisational phrases that make a musical whole. Askren's bright toned archtop takes over with a series of single note flurries, punctuated by modal voicings. Bassist Belzaguy keeps his upper register solo close to the melody with solid intonation, which leads to the modal guitar-bass vamp for Banda's drum solo. The relaxed feeling, solos and harmonic twists makes this version a welcomed addition to the extensive canon of takes on this classic tune.

"Old Folks" is another surprise with its Kansas City shuffle feel. Askren states the melody first with a strong separation of melody and accompanying chordal figures. Benedict takes it from the bridge out with an inventive balance of the melody and embellishments. Askren does a nice job of mixing a funky/blues overtone into the standard jazz vocabulary during his solo. In fact, the quartet as a whole does a fine job of mixing funk and blues feels with jazz, especially on Benedict's original "Like Friends," which embodies the idea of laying fresh melodies over a re-harmonized progressions based on a classic tunes ("Just Friends") with a fresh feel and emotion.

"Speak Low" is presented in the common swinging fashion which allows the rhythm section of Banda and Belzaguy to display their symbiotic existence clearly. Askren turns in his most active solo with a multitude of climbing flurries and emotional quick rakes of undistinguishable arpeggios, all yielding a very enjoyable solo statement. Benedict and Askren have a series of proficient exchanges that build a steady energy both within the form and during the ending.

The blending of funk and jazz was eloquently achieved, with creative arrangements of standards and well-conceived originals. Askren's goal of balancing nostalgia and freshness in equal measure is clearly unmistakable with It's All About The Groove.

Nature Boy; Holmes; Old Folks; Monk’s; Like Friends; Speak Low; McCannism; You Stepped Out of a Dream; While We’re Young; The Weather Is Here, Wish You Were.

Title: It's All About The Groove | Year Released: 2014 | Record Label: DaWayMusic