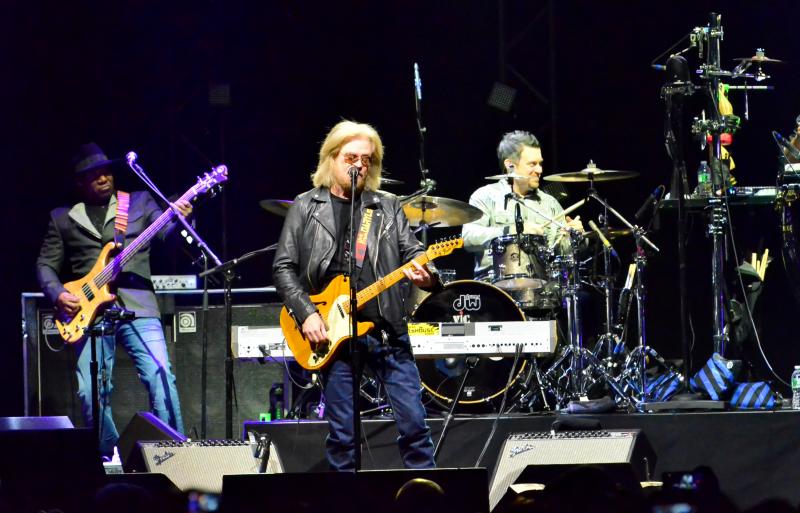 It was soul night at Madison Square Garden. The evening began with Detroit Soul-pop as supplied by Mayer Hawthorne. Sharon Jones & the Dap-Kings brought its own patented version of soul-funk. And to top it off, the evening's headliners, Rock 'N' Roll Hall of Famers Daryl Hall and John Oates and their band delivered a powerful set of blue-eyed Philly Soul.

The evening began when Andrew Mayer Cohen, known to many by his stage name Mayer Hawthorne and his band took the stage. The Grammy-nominated singer, songwriter, DJ, multi-instrumentalist and producer got the multi-generational audience at "The World's Most Famous Arena" on its feet and into the mood by delivering a high-energy set that included "Back Seat Lover," his latest single the funky neo-R&B flavored "Love Like That" from Man About Town (Vagrant Records, 2016) and "No Strings Attached" from 2011's How Do You Do (Republic). The set ended with an eclectic mash-up of "The Walk" featuring Aerosmith's "Walk The Way" as its intro and a segue into Brenton Wood's "Gimme Little Sign" with its "Just give me some kind of sign girl" chorus as the outro.

When Sharon Jones & the Dap-Kings took the stage the already happy crowd became almost delirious. Jones who is just over five feet tall is a sight to behold. She is a dynamo. The energy, effervescent personality and joie de vivre that she displayed during her ten song (nine if you don't count the instrumental opener) set was infectious. Backed by her dapper band and dressed-to-the-nines back-up singers back-up singers (the Dapettes), Jones had the audience on its feet and dancing in the aisles. As she shimmied, shook, bopped and danced her way across the stage, the vivacious singer was like a tiny pied piper leading the crowd to the promised land.

Following the instrumental opening number, Jones sashayed her way onto the stage and delivered and fiery version of "Retreat!" (which could get a dead man on his feet and shakin') followed by "If You Call" from the 2011 Daptone Records release I Learned the Hard Way. The show remained high energy while changing gears slightly for "Stranger To My Happiness," "She Ain't A Child No More" and "Long Time Wrong Time" with its bossa nova beat and feel. "People Don't Get What They Deserve" from Give the People What They Want (Daptone Records, 2014), "Let Them Knock" with its "Nobody but you" lyric and bluesy edge, "I'm Not Gonny Cry" and a killer version of "100 Days, 100 Nights" rounded out the set. As the band played on, Jones dancer her way off the stage. As she disappeared into the wings she could be heard stating "Good Night, y'all. I've got to go!"

When Daryl Hall and John Oates appeared on stage, the crowd which had been worked into a near frenzy be the opening acts immediately switched back into party mode. Party mode on this night began with the first notes of "Out Of Touch. It was also "Sing Along With The Legends Night" featuring Master of Ceremonies Daryl Hall and his partner in crime John Oates.

After the opening song, Hall addressed the crowd. He said, "Good to see everybody. How you all doing? You good? Great to be in New York City...hometown and all that." If the audience wasn't already on the brink of delirium, Hall and Oates sent them further out on the ledge with spot-on versions of "Family Man," "Maneater," "Did It In A Minute" and "Say It Isn't So."

The greatest hits set featured hit singles released by the duo during its '70s and '80s classic period. The lone exception was the funky "Las Vegas Turnaround" an album track from Abandoned Luncheonette (Atlantic Records, 1973).

Other highlights included the duo's version of the Righteous Brothers' "You've Lost That Lovin' Feelin'" (covered on 1980's RCA Records release Voices), "She's Gone" with its R&B Flavor, an extended intro version of the melancholy "Sara Smile," "Do What You Want, Be What You Are" and an extended jamming version of "I Can't Go For That (No Can Do)" featuring the excellent sax work of Charlie "Mr. Casual" DeChant.

As the final notes faded into the ether, Hall and Oates and their band waved to the crowd took a quick bow and retreated backstage. After a very short respite the band was back on the stage. The first encore set was the one-two punch of "Rich Girl" and a sing-along version of "You Make My Dreams Come True." The band again bowed and left the stage, but only for a moment. When they returned, Hall introduced the players—guitarist Shane Theriot, bassist Klyde Jones, multi-instrumentalist Eliot Lewis, Brian Dunne on drums, percussionist Porter Carroll Jr., DeChant and of course, Oates on guitar and backing vocals. At this point Oates, who spent his evening providing tasty and economical signature licks and solos with sweet and clear backing vocals, introduced Hall. "Kiss Is On My List" and "Private Eyes" followed pushing the worked-up crowd into a fever pitch.

The evening ended with the third and final encore, a fantastic version of the Delfonics' "Didn't I (Blow Your Mind This Time)" which featured Mayer Hawthorne and Sharon Jones. If that was the musical question of the evening. The answer was a resounding "Yes!"