By DAN BILAWSKY
December 7, 2011
Sign in to view read count 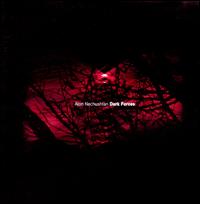 The idea of placing a variety of daring instrumental personalities within different electronic-based sound collage nightmares is bold but, ultimately, hard to classify or grab onto. Dark Forces can't truly be called electronic music since the whole point of the music surrounds the integration of electronic and human elements, and it's hard to view it as free improvisation, since Alon Nechustan has painstakingly painted each musical canvas. Some might call it ambient music, but that tag usually describes a more transcendent form of musical meditation, or sonic numbness that doesn't really line up with Nechustan's doomy, futuristic picture of electronic disturbance, and no other descriptor really seems to do the music any justice.

An impressive collection of musical renegades was brought onboard for this project, and the only downside of the presence of these prized personnel comes from their not always having enough room to truly assert themselves. Tenor saxophonist Oleg Raskin comes out like a terrifying bird of prey at one point during his album-opening appearance, while cellist Okkyung Lee finds the right balance between soloist and soundscape collaborator and bassist Mark Dresser works nearly as well in his own setting; but other normally formidable voices. like trombonist Steve Swell and tuba titan Marcus Rojas, are never heard to their potential.

The pieces themselves are frightening trips through the darkest recesses of the human mind, as Nechustan creates a form of musical psychopathy that terrifies more from its potential for what may come around the corner than what is actually there. In this respect, Nechustan is able to conjure the elements of fear and uncertainty that reign supreme in the heads of horror movie lovers, while also creating left-of-center music that's out of this world. Dark Forces truly paints Nechustan as a downtown doomsayer, capable of crafting devilish musical works that combine man and machine in disturbing fashion.