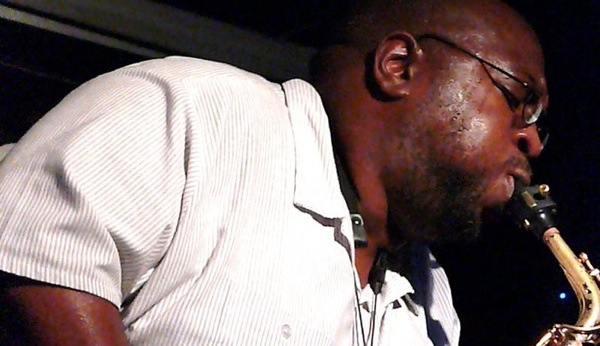 By AAJ STAFF
January 11, 2011
Sign in to view read count
Alto saxophonist Darius Jones—who won most critics' nomination for the best jazz newcomer album of 2009 for Man'ish Boy (A Raw And Beautiful Thing) (AUM Fidelity, 2009)—is a great fan of Johnny Hodges. He says that the lyrical Duke Ellington altoist is his hero, and this is pleasantly noticeable at the beginning of Man'ish Boy. It is also a good thing; not only did Hodges possess one of the most beautiful sounds in music, but Jones' focus on Hodges-like bends and slurs serves to give his sound a clear originality—or at least a signature—that many saxophonists these days lack.

Jones is also a composer, and his frequent use of the trio format allows him maximum room to write creative compositions. He listens to a wide range of music, from Mozart and Muddy Waters to Nirvana, and his music is a pure attempt to present something new. Man'ish Boy is not your "standard" saxophonist record; its compositions contain so much fine and varied detail from all three instrumentalists, that headphones or large speakers may be needed to really pick up all the sounds. Jones takes his span of influences and projects them all onto a new canvas, fully succeeding in his creative aim. Both Cooper-Moore, on piano and diddly-bo, and drummer Rakalam Bob Moses are brilliant trio mates—musicians of great depth and color. Moses achieves almost talking drum effects, and Cooper-Moore's home-made diddly-bo is nothing short of extraordinary in its sonic variety.

Jones has always been fascinated with sonics in general, and, while a student in Richmond, Virginia, was extemporizing with computer improviser Marty McCavitt in the group Birds in a Meadow. Jones came to New York in 2005, and soon formed the now-internationally known noise jazz group Little Women, with, tenor saxophonist Travis Laplante, guitarist Andrew Smiley and drummer Jason Nazary. The band has been described by an Austrian magazine as providing a "first-hand idea of what terror can mean," and its music is an example of another Jones focus: creating order from chaos.

Jones also emphasizes the importance of writing music organically. It may be that it is now necessary to make this point more frequently, as there are so many people pressing buttons on machines to "make music" these days. Any lasting or real music must be organically created. Learning as you go and letting things happen naturally are the key.

New York singer/composer Lola Danza, an occasional colleague, has said that "we are now past 'avant-garde' [in the traditional jazz usage of the phrase], and are doing something new—we just don't know what to call it yet." Jones is an example of this new type of music which, while containing much jazz influence and clearly still remaining jazz, is being written by people who have listened closely to rock and other music that has come about since the '60s. You could try calling it "rock-jazz," or even "indie jazz." As Jones says, he is not "free" and he is not in the "standard" category of current sax soloists: as he puts it, "There is a third category, and I'm about to show you what it is!" The album also contains much sonic experimentation. You hear the steamy South, the evocation of wailing African flutes, and experimental rock-like explorations, all played acoustically.

Ellington always spoke in terms of writing tone parallels, and it is a fair assumption that Jones is taking that approach on Man'ish Boy (A Raw And Beautiful Thing), the first in a projected series of albums that will trace life in the American South, where Jones grew up, and the saxophonist's own development and experiences, while presenting different musicians over its course.