By EYAL HAREUVENI
September 11, 2012
Sign in to view read count 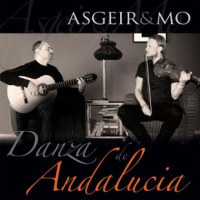 In the same manner that jazz is a musical genre not only because of its origins in the Afro-American cultural legacy but more important due to its liberating spirit, so, too, can flamenco music not just be bound to its southern Spain, Andalusian borders. Stavanger, Norway-based flamenco guitarist Asgeir Aarøen and classical violinist Bjarte Mo suggest, on their debut album, that flamenco music is already a universal musical language that draws inspiration and reference musical traditions from all over the Mediterranean, the Middle East, Balkans and South America without compromising its original passionate essence.

All of Danza de Andalucia's thirteen compositions were composed and arranged by Aarøen, who has his own distinctive style—exquisite, lyrical, nuanced and rich—and his guitar solos flow with images and ideas that manage to avoid overpowering the writing. Mo is an ideal partner, with his fiery playing, organically completing Aarøen's gestures. Bassist Magnus Rød Haugland adds a light, swinging touch, and percussionist Gabriel Cicaiza contributes Latin rhythms.

The most beautiful compositions are those which transform the flamenco sensibility into new terrains, such as the lyrical, chamber-like ballad "Dine hender i mine (Your Hands In Mine)," delivered with subtlety and refinement, or the gently cinematic "Natt i Netanya (Night in Netanya)." The title piece unfolds patiently through a series of detailed solos by Aarøen and Mo, augmented with dramatic flamenco dancing by Noelia Sabarea, but still has a cool Nordic flavor. Aarøen's emotional remembrance for his father ("Minner frå Enerhaug (Memories of Enerhaug)") features subtle and masterful performances by both the guitarist and Mo. "Tur langs elva (Stroll along the River)" is a more modern, lyrical piece, with Aarøen switching to classical guitar. The breezy and playful closer, "Sommarsong (Summer Song)," finds common threads with Norwegian folk tradition.

About Asgeir and Mo