By DAN BILAWSKY
February 8, 2014
Sign in to view read count 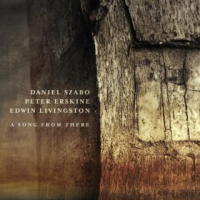 Some musicians are late bloomers. Others start while most people their age are occupied with finger painting and play-doh; Daniel Szabo belongs to the latter category. The Hungarian-born, Los Angeles-based pianist was playing and composing at the age of four, but that's not so surprising since he grew up in a house with two musician- parents.

Szabo had already taken top honors in several international piano competitions by the time he earned his B.A. from the Franz Lizst Academy of Music in Budapest in 2000. A year later he was moving on to the Henry Mancini Institute in Los Angeles, and two years after that he packed up and moved east to study at the New England Conservatory. Szabo soaked in everything that arranging/compositional giant Bob Brookmeyer, pianist extraordinaire Danilo Pérez and numerous other professors had to offer at that venerable institution, and then he began making a name for himself.

Szabo already had a few records under his belt before he was through with his studies, but he upped the ante with his post-graduate output, inviting guitarist Kurt Rosenwinkel to join his trio on Frictions (Warner Jazz, 2007) and bringing saxophonist Chris Potter in as a guest on Contribution (BMC Records, 2010). Now, four years after his last record, Szabo returns with another trio outing, but it's a true trio outing this time. There's no big name plus-one joining in here, and if somebody else had dropped by, they'd just be in the way. Szabo's musical relationship with bassist Edwin Livingston and drum legend Peter Erskine is a finely calibrated one that could only be hurt through intrusion.

A Song From There starts out with a bad omen, as Szabo hogs the glory, interacts only mildly with Livingston, and leaves Erskine to play a train beat with brushes under much of "Hun-Fro Blues." The performance doesn't seem to go anywhere and it doesn't really hold interest. It's the only time that these three men fail to connect, as the bad omen turns out to be a false omen. The alternate version of the song that's tacked on to the end of the album, along with every piece that sits between the two takes, presents a far more empathetic outfit.

This trio can be nimble and graceful ("Kids' Dance") or downright dangerous ("Barbaro Con Brio") depending on the circumstances at hand. Szabo and Erskine seem to sparkle in the distance when Livingston steps out, but they have no problem bearing down when the music calls for it. Szabo spins out attractive numbers ("I Crooned It Before") and mournful melodies ("A Song From There") with confidence, and his work almost seems to give off trace elements from Brad Mehldau on occasion ("Eastynato").

It's not hard to see why players like Alan Pasqua, who wrote the liner notes for this project, and saxophonist Bob Mintzer, who initially brought Szabo into Pasqua's line of sight, have great things to say about him. This is finely wrought trio work that captures the imagination.

Hun-Fro Blues; Kids' Dance (Dedicated To Aron And Julia); Eastynato; A Song From There; Barbaro Con Brio (Hommage a Bela Bartok); I Crooned It Before; Hun-Fro Blues-Alternate Take.

Title: Daniel Szabo: A Song From There | Year Released: 2014 | Record Label: Self Produced