Daniel Humair in the Lions' Dens

By JEFF DAYTON-JOHNSON
January 17, 2011
Sign in to view read count
Drummer Paul Motian is well-known for his "melodic" percussion, in which he skits and dodges arrhythmically, letting the guitars and saxophones mark the pulse of the composition. But for all the praise breathlessly—and deservedly—heaped upon Motian for this approach, the number of drummers who follow his example somewhere on this side of the free-jazz frontier, is relatively small. Swiss drummer Daniel Humair is one such example. Humair is too little known in the US, despite having worked with reed players Phil Woods, Lee Konitz, Joe Henderson, Dexter Gordon, Johnny Griffin, Eric Dolphy and Anthony Braxton, pianist Bud Powell, trumpeters Chet Baker and Art Farmer, and guitarist Jim Hall—and this list doesn't include the European heavyweights with whom he's played over the last fifty years. The originality of his playing on these two trio discs proves that Motian's approach deserves to be wielded by other exponents, and that in sufficiently creative hands, need not sound like Motian.

The two trio dates under review vary in their instrumentation—sax/guitar/drums and sax/bass/drums. On each, Humair is accompanied by a young lion who will be familiar to watchers of the restless New York scene (guitarist Ben Monder in the first case, saxophonist Tony Malaby in the second) as well as a French musician. Monder, in fact, played on Malaby's excellent Paloma Recio (New World, 2009). Saxophonist Jerome Sabbagh, meanwhile, is both French and a New York hotshot, of course.

While the performances on I Will Follow You are based on compositions, some are the merest of sketches and most feature sizeable doses of free playing. Pas de dense, in contrast, is a set of 12 collectively improvised "sequences," some rather free, others evincing a high level of spontaneous composition. On both records, the performances, with few exceptions, tend to be short, not overstaying their welcome. On balance, Pas de dense embraces a broader set of musical elements, and is the more explicitly and aggressively ambitious release; that I Will Follow You does not wither in comparison, as many other discs would, is evidence of the strength of its slightly more understated and conservative aims. 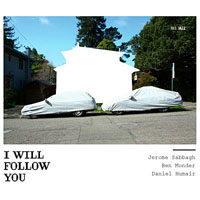 Saxophonist Sabbagh is the nominal leader among equals on this date: he composed or co-composed all but one of the pieces. He has established a solid reputation on the basis of three strong records under his name: North (Fresh Sound New Talent, 2004); Pogo (Sunnyside, 2007); and One Two Three (Bee Jazz, 2009), the first two of which also feature guitarist Monder. The consistent fluidity and beautiful tone of the saxophonist's playing on I Will Follow You will not surprise those familiar with the earlier discs, but the rather more adventurous structural framework of the performances may surprise more than a few.

One aspect of the freer framework is the aforementioned Motian-esque tendency to leave the rhythmic work to the sax and guitar, leaving Humair to improvise in non-rhythmic dimensions on "The Clown" and "Haiku," for example.

Guitarist Monder draws gleefully upon the grammar of rock 'n' roll guitar on the excellent "Saloon" and "Rahan," but does so in the service of a jazz-based improvisational standard, empathetically attuned to his trio mates (as in the bass-line he provides on the title track).

The set list effectively alternates between quiet and loud numbers, closing with the only non-Sabbagh composition, Sammy Cahn's "I Should Care." (It was Cahn, by the way, who delivered the best line in The House That George Built [2008], Wilfred Sheed's witty book on the composers behind the Great American Songbook: asked which comes first, the words or the music, Cahn quipped, "First comes the phone call.") On paper, it looks like it doesn't belong with the progressive performances that precede it. But the standard fits in perfectly, gently but convincingly situating this fine and thoroughly contemporary record in a longer jazz history.

Pas de dense comprises 12 collectively improvised performances. This sounds like a recipe for free jazz, but "free" by no means signifies "unorganized," and in any case, "spontaneously improvised" doesn't necessarily mean "free."

There is a self-contained coherence and overarching design to the music on this record. One element of this is Malaby's aggressive, grainy playing throughout. Others have to do with the structural characteristic of the compositions. The fourth sequence (the tracks are untitled) is based on a sustained, pulseless arco bass tone, accented by Humair's imaginative cymbals: Malaby plays a jittery, high-pitched saxophone line that attempts to sound like a sonic combination of what the other two musicians are playing. There are antecedents for this sound in other free jazz records, but the overriding sensation is one of an exceedingly conscious effort by the trio not to sound like any other kind of music.

The funny thing is, having laid out the basic rules of a radically new sonic game, the trio decides, on the ninth sequence, to return to them later: there are clear signs on this later track that the musicians are once again speaking the earlier language, and find that they have even acquired greater fluency.

Moreover, these experiments with new rules of the game alternate with more conservative musical procedures. The third sequence, for example, features a spontaneously composed but infectious melodic line, vigorously played by Malaby and underlaid by full-bodied drumming by Humair, who sounds like he's trying to keep up with the Joneses—in this case, Philly Joe and Elvin. The trio alludes to the same melodic line in the fifth sequence.

Perhaps paradoxically, Humair resorts less frequently to the Motian-inspired melodic drumming on Pas de dense than he does on the Sabbagh record. In this freer-ranging territory—and this brief review has only scratched the surface of the musical ideas developed here—there's arguably greater need for the drummer to provide a steady beat.

Tracks: I Will Follow You; Monolith; The Clown; Comptine; Come With Me; More; La Fée Morgane; Saloon; Apaisé; Rahan; Haiku; We Play, Then You Play; I Should Care.