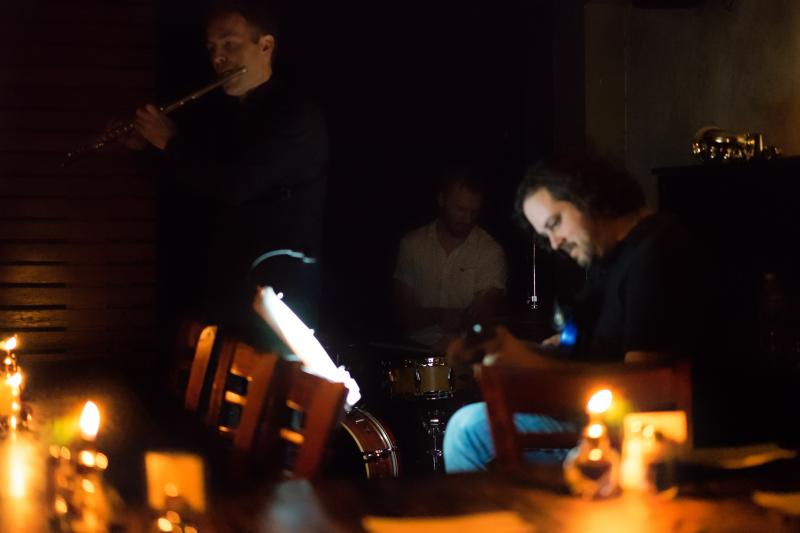 The Daniel Bennett Group is a summer camp that never sleeps. Like the best-run such operations, it's an oiled machine that runs on freedom and strict supervision in equal measure. The multi-instrumentalist and his core band of Nat Janoff (guitar) and Matthew Feick (drums) are scoutmasters of the highest integrity, who as such know that all the merit badges in the world don't mean squat unless you've got a genuine passion beneath them.

If the medley with which they opened this August 2017 appearance at Tomi Jazz (where they do a monthly residency) was any indication, a cabin had been meticulously prepared for everyone in the room. "Paul Platypus" was indeed a complex and multifaceted thing that found the bandleader switching effortlessly between alto saxophone, flute, oboe, and piccolo. With characteristic whimsy and symmetry, the trio jig-sawed its way through every change. Janoff and Feick brought out the inner life of Bennett's extroverted motifs. And while it may have set the tone in terms of tactile engagement and groove quotient, at about 15 minutes in length it was the exception to a concise rule. For in the same way that listening to early Beatles songs always reminds me of their ability to express so much in compact durations, so too did the DBG keep tunes at a respectable length. Flights of fancy were therefore even more alluring for their brevity.

With titles like "Clown Chemist," "Doctor Duck Builds a Patio," and "The Old Muskrat Welcomes Us," on paper the DBG might seem to be a tongue-in-cheek outfit, when in fact these images are neural doorways into free association. Neither would they hold water if the music (and execution of it) wasn't so fluent. Playful but always in the pocket, the set jumped from carnivalesque nightmare to metal to military march as if it were the most natural thing.

Time has been a central theme in Bennett's sound-world from the first tick and continued to be through every tock of this performance. Whether in the funky, teeth-gritting excellence of "Patience" or the tessellated groove of "Loose Fitting Spare Tire," not a single second felt expendable. Each musician had his own interpretation of this ethos. Janoff's vehicle du jour, "Andrew Variations," showed the guitarist at his expressive best, while "Sinking Houseboat Confusion" (from the eponymous album) proved that Feick is a drummer who understands the sheer physicality of a tune. All the while, Bennett himself dipped into a pool that was at once fresh and nostalgic. From his interdisciplinary talents to his clever melodic quotations, such as a brief flirtation with "You Are My Sunshine" in the original "Paint the Fence," each new venture was a solid gain. These tunes were their own guarantee, a promise fulfilled in, and by, every measure.