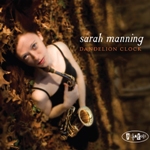 Abstraction and accessibility isn't an easy match, but alto saxophonist Sarah Manning weds the two with fine results on Dandelion Clock. Manning's desire to create "a working, stable group that through rehearsals and philosophy lives and breathes on stage as a musical unit," is largely achieved with this quartet, featuring bassist Linda May Han Oh, pianist Art Hirahara and drummer Kyle Struve.

These players aren't content to just play time or deliver, bland cliché-ridden music. While Manning bookends the album with two classics—starting with Jimmy Rowles' "The Peacocks" and ending with Michel Legrand's "The Windmills Of Your Mind"—her conception of these pieces marks her as a restless musical explorer and creative small group arranger. Her delivery of the melody on "The Peacocks" introduces a sound that, while controlled, has a slightly tart and edgy sound to it. Some saxophone phrases end with fluttery sendoffs and Hirahara pushes a bit, but then holds back, during a compelling piano solo. All the while, the rhythm section creates a loose, rumbling musical underbelly. "The Windmills Of Your Mind" takes shape with Manning and Oh beginning the piece. The music seems to be reverse-engineered and the pieces are put together and stabilized by Hirahara and Struve. Manning's take on this song contains more thrust than most, bringing something new to both of these well-worn pieces.

The remaining seven songs—Manning's compositions all—are no less original. When "Habersham Street" begins, it sounds like it could have been a long lost relative of Billy Strayhorn's "Blood Count," but this doesn't last too long. The band picks up steam when Hirahara solos, and a saxophone cadenza closes out the song. The ticking of the clock on "I Tell Time By The Dandelion Clock" is represented by Struve's steady clicking and some repetitive, ominous bass and piano motifs that come and go.

Oh's steady rhythm introduces "Crossing, Waiting," as Manning delivers a melody filled with mystery and paranoia, leading to Oh taking control with an exhilarating solo. Manning returns with a slightly more angular and rough sound, while Struve takes over for an unaccompanied solo. Struve and Oh create a doom-laden cadence on "The Owls (Are On The March)" features a unique rhythmic structure that allows the music to briefly morph into swing and then a Latin-esque groove, with Hirahara delivering his wildest and most unruly playing on the album. The highlight on "Phoenix Song" is the interplay and exchanges between Manning and Struve. Manning solos, with only drums beneath her, and then removes herself, allowing Struve to wreak some havoc.

Manning's writing and playing, along with the singular, organic nature of this quartet, makes Dandelion Clock a winning listen from beginning to end.