John Brown: Dancing With Duke: An Homage To Duke Ellington 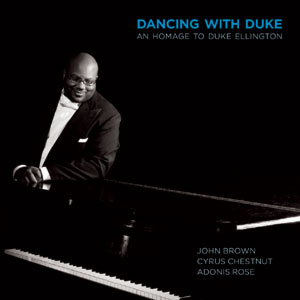 The cover photo for this album is a bit misleading. John Brown stands with his left forearm pressed against a shiny black piano and the album title—Dancing With Duke: An Homage To Duke Ellington—resides, clear as day, in the upper right hand portion of the cover. If not for the personnel list, which almost blends into the side of the piano and lists pianist Cyrus Chestnut's name right under Brown, those unfamiliar with the bassist might assume he were tickling the ivories here.

Brown boasts an impressive résumé, having worked with Elvin Jones, various members of the Marsalis clan, and vocalist Nnenna Freelon on her Grammy-nominated Shaking Free (Concord, 1996), but his work as a sideman, actor, jazz educator, and producer, has left him little time to pursue his own recording projects. Dancing With Duke: An Homage To Duke Ellington is his third release, following Terms Of Art-A Tribute To Art Blakey And The Jazz Messengers (Self Produced, 2007) and Merry Christmas, Baby (Self Produced, 2007), and his first effort to feature a trio instead of a quintet.

While Brown's pliant bass work is at the center of all of the action on these ten slices of Ellingtonia, Chestnut's piano work is the action itself. By choosing the piano trio format to pay tribute to one of jazz's most significant pianist-composers, and selecting a pianist with such prodigious talent, Brown places himself in a situation where he is, more often than not, relegated to a supporting role on his own album, but that doesn't diminish the success of this music. In fact, this trio does marvelous things with the music of Ellington, regardless of who receives top billing. Brown's bass is front and center on the rarely-covered "Pie Eye's Blues," and his solo work on "Do Nothing 'Til You Hear From Me" is the highlight of that particular piece. Chestnut's chops, along with his unabashed enthusiasm for the music, come to the fore on a smoking take of "Perdido," and his exuberant runs and bluesy tremolos make "In A Mellow Tone" anything but mellow.

While Chestnut's larger-than-life pianistic personality often threatens to eclipse his trio mates' contributions on the more lively material, he knows when to take a back seat, as demonstrated during Brown's arco recitation of the melody on "Solitude." In other places, all three men tackle the music on fairly equal footing. Chestnut leads from the front, while Brown and drummer Adonis Rose bolster his perky distillation of the melody from below on the odd-metered, faster than usual "Isfahan, " and all three men live and breathe the message that resides in the title of "It Don't Mean A Thing (If It Ain't Got That Swing)."

While Ellington tributes are never in short supply, that doesn't mean the jazz world doesn't have room to accept and enjoy another one. Ellington only knew two categories of music—good and bad—and Dancing With Duke: An Homage To Duke Ellington, fits firmly under the former heading.

In A Mellow Tone; Do Nothing 'Til You Hear From Me; Perdido; Pie Eye's Blues; Isfahan; I'm Beginning To See The Light; A Flower Is A Lovesome Thing; I Got It Bad (And That Ain't Good); Solitude; It Don't Mean A Thing (If It Ain't Got That Swing).