By BRUCE LINDSAY
January 13, 2011
Sign in to view read count 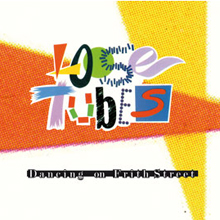 Twenty years after the legendary Loose Tubes played its final gigs, Dancing On Frith Street, a live album taken from those valedictory performances at London's Ronnie Scott's Club in September 1990, offers a chance for jazz fans of a certain age to reminisce, and an opportunity for those who missed the band's performances the first time around to check out its live sound. Thankfully, this superbly produced, atmospheric and exciting album enhances the band's reputation. It should also bring it to the attention of a legion of potential new fans.

Loose Tubes formed in London in the early '80s—an iconoclastic big band that broke down barriers between genres to embrace and incorporate rock, reggae and Latin sounds in its compositions—and recorded three studio albums including the Teo Macero-produced third album, Open Letter (EG, 1988). The 23-piece lineup on this live album includes many players who are now at the forefront of jazz in Britain and Europe, including keyboardist Django Bates, saxophonists Mark Lockheart and Iain Ballamy, and guitarist John Parricelli.

The members of Loose Tubes were talented players with a love of jazz, but they never took themselves too seriously, as the between song announcements captured here readily show. Parricelli, for example, is celebrated in one announcement for "sometimes using all six strings of the guitar simultaneously."

While Loose Tubes drew on an eclectic mixture of influences, some elements of its sound immediately mark it as an '80s ensemble—Parricelli's guitar on "Shelley" and some of Bates' electronic keyboards on "Last Word" are prime examples—sounds that are still fun but also immediately evocative of their time. For the most part, however, the tunes sound fresh, distinctive and rather timeless, always upbeat and danceable but never repeating the same formula.

Bates' "Godbucket," which features Lockheart's funky tenor solo, has an insistent and irresistible beat that makes superb use of percussionist Thebi Lipere and drummer Martin France. "Like Life," another Bates number, resembles the theme tune to '70s BBC television show The Generation Game. "Village," by trumpeter Chris Batchelor, starts off like a New Orleans funeral march, before metamorphosing into a jaunty slice of Klezmer-ish dance music.

What Dancing On Frith Street makes abundantly clear is the power and energy of the Loose Tubes horn section. The opening riffs on flautist Eddie Parker's "Last Word" and Bates' "Yellow Hill" are so solid and powerful that they could have knocked over audience members at ten paces. This power is just part of what makes Dancing On Frith Street such a resounding success. There's also a great live atmosphere, captured with terrific clarity; a set of tunes that has fun at its center; and a healthy degree of irreverence. Volumes 2 and 3 are still to come: now there's a prospect to be relished.