By BRUCE LINDSAY
October 28, 2015
Sign in to view read count 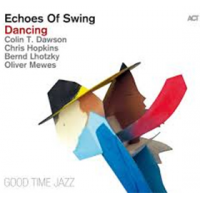 Across a couple of decades and seven albums Echoes Of Swing, a quartet based in Germany, has been inspired by swing music. Dancing is once again centered on swing, with the band taking its inspiration from the music and adding a contemporary twist.

The band draws its material from a wide range of sources—both chronologically and stylistically. Generally this eclectic approach is effective, but Johann Sebastian Bach's "Gavotte I, English Suite No. 6" is more kitsch than swinging. Classic tunes like "Carioca" or Sidney Bechet's "Premier Bal" are played with verve as well as a few original twists and turns. Pixinguinha's "Diplomata" is joyful and danceable. The band's most inspired take on a much-loved favorite is the waltz-time "Charleston"—a great ensemble performance and a rhythmical shift that threatens the cruciate ligaments of swing dancers the world over.

The band's own tunes have an authentic feel, standing up well alongside the classics such as "Premier Bal." Altoist Chris Hopkins' "Hipsters Hop" is a fine up-tempo swinger: best of all is the mid-album pairing of pianist Bernd Lhotzky's cheery "Lion's Steps" (dedicated to Willie "The Lion" Smith) and Hopkins' graceful and seductive "Ballet Of The Dunes"—Lhotzky's playing has Ellingtonian touches in the former, Oliver Mewes' restrained percussion sets the mood for the latter.

The band members are all talented musicians, able to move smoothly from the subtlety of "Ballet Of The Dunes" to the good-natured humor of "All You Want To Do Is Dance." Colin T Dawson's vocal ability doesn't match his instrumental prowess, however—his light, thin, voice can't adequately convey the romance of "Moonlight Serenade" or Cole Porter's "Dream Dancing." It doesn't spoil the party, though. The music on Dancing matches the legend on the album cover—Good Time Jazz.

About Echoes Of Swing