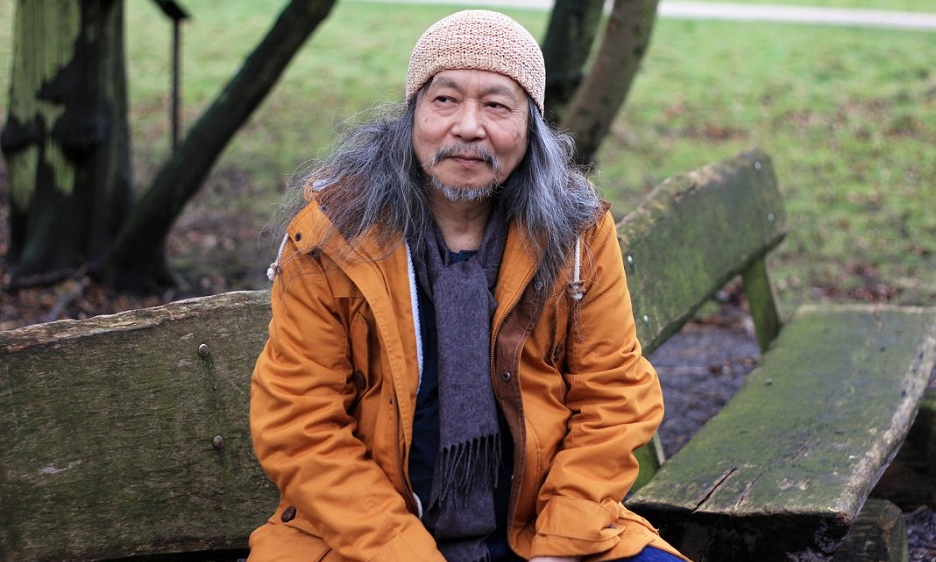 Appearances can be deceptive. The Menagerie, tucked away at the Ormeau Road end of University Street, is unlike any other music venue in Belfast. The old, weather-beaten red brick may look like a Temperance Hall-turned-squat, but behind its unassuming façade it boasts arguably the most eclectic music program in the city. Wednesday evening saw legendary singer Damo Suzuki make a welcome return to the city.

At sixty-eight, and battling colon cancer, Suzuki appeared slight and just a little frail as he mixed with fans pre-gig. On stage, however, it was a different story.

The former Can lead singer, back in Belfast just a year after his gig with Blue Whale and Paul Stapleton in Black Box, has been a frequent visitor to Ireland in recent years. Further back in time, in 1969, Suzuki spent a time living in County Wexford, one stop on the way as he busked his way around Europe, famously being recruited by Can's Holger Czukay, who saw the young Japanese singer singing outside a Munich café. The rest is history.

For the past fifteen years Suzuki has traversed the globe playing completely improvised music with local bands, which he dubs Sound Carriers. From Peru to Lebanon, from Indonesia to Macedonia and every point in between there have been over five hundred Sound Carriers to date.

Bar the odd head of a certain vintage, the sizeable crowd inside The Menagerie was made of twenty-somethings. Suzuki, the old improv warhorse, is clearly still as relevant for this generation of avant-garde, experimental rock lovers as he was nearly fifty years ago.

Two bands were on the supporting bill of this The Thin Air production. Four-piece psychedelic rockers Blumehaus' set wasn't short on energy but suffered from terribly muddy sound, the ear drum-splitting volume rendering the material—like a grungier Ozric Tentacles—indistinct. In less than ideal sonic conditions any review would seem unfair. Prior to Blumehaus, Unbelievable Lake enjoyed better sonic fortunes. Guitarist Stevie Lennox, bassist/synth player Pat McCann and drummer Connor O'Doherty have been playing together for a couple of years but only began playing live six months ago, inspired to make the leap from garage to stage after witnessing Swans at Primavera Sound.

This was only Unbelievable Lake's fourth gig but the trio from Magherafelt impressed with a thundering set, its mix of stoner-cum-space rock drawing from psychedelic-era Pink Floyd and early Hawkwind. At one extreme drone, swirling synth and ambient textures, at the other Lennox's soaring vocals, grinding riffs and unrelenting cosmic grooves—one song tethered to the next by feedback. It's early days yet but Unbelievable Lake looks set for a bright future.

After some delay, during which the bar did brisk business, Damo Suzuki and local three-piece Electric Octopus took to the stage at twenty to midnight. Following the intensity of the opening bands, Suzuki and his Sound Carriers started with a comparatively chilled, funk groove. Dale Hughes, drummer Guy Hetherington and guitarist Tyrell Black plotted a fairly simple rhythmic course as Suzuki riffed -his personal language flitting between mantra-like motifs and guttural growls. From the off, however, the musicians gelled and it wasn't long before they started steering the music into more adventurous territory, as the music waxed and waned in intensity.

It seemed like Suzuki had been heading this band for years, so attuned was he to its rhythmic tides, though bar a ten-minute sound-check there had been no prior rehearsal. This is Suzuki's modus operandi. No safety nets for anyone. With the undemonstrative Hughes anchoring the band, Hetherington's bustle and Black's tirelessly inventive comping pushed Suzuki for the full seventy minutes. Suzuki brought much more than just improvised vocals to the table, his pronounced rhythmic contours therein lifting the music to intense plateaus and easing it down again.

Slower passages allowed Tyrell's flowing lines to emerge more fully, though his comping—effectively one tremendously long, winding solo--- was just as arresting, laced as it was with traces of Jimi Hendrix's psychedelic blues and James Blood Ulmer's raggedy jazz- funk. After a vocal segment of genuine lyricism and over a funk bass groove the guitarist teased out a solo as hypnotic as curling smoke on an airless day. Then, ignited once more by Suzuki, Tyrell exploded in a flurry of spluttering sparks, jagged chords and searing high notes. It was thrilling stuff and the crowd responded enthusiastically.

Throughout the performance the crowd danced to the music's rhythms—the symbiosis between musicians and audience, the emotions transmitted from stage outwards and vice versa, evident to all. In the final stretch, with a wicked funk groove at full tilt, Suzuki's riffing whipped the audience into fevered trance-like state, like a shaman channelling the spirit world. When the music stopped the crowd erupted in a wave of cheers and applause. Suzuki embraced Black, Hetherington and Hughes, thanked the crowd and stepped off the stage.

Utterly drenched in sweat, his long grey hair plastered to his skull, Suzuki humbly and patiently posed for photographs and shook a lot of hands. He looked spent, utterly exhausted, but there was a large smile on his face. Suzuki takes morphine-based drugs daily to combat the cancer, but you suspect the medicine that really keeps him gigging around the world is the music. There may be no sense, at least in any orthodox understanding, to his improvised language, no meaning to transmit, but when music's energy connects emotionally with people, when it affects them as profoundly as it did tonight through the indomitable Damo Suzuki and the outstanding Electric Octopus, then music itself is the message.

N.B. Yorkshire film maker Michelle Heighway's crowdfunded documentary on Damo Suzuki and his fight against cancer, Energy has been four years in the making.