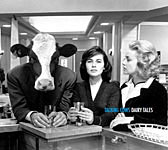 When a jazz ensemble calls itself Talking Cows, the temptation to make comments about its moo-sic or its horn section is almost too great. But the temptation should be resisted, because this particular group brings much more to the contemporary jazz scene than an opportunity for cheap puns. This Dutch quartet's second CD—the follow-up to Bovinity (Morvin Records, 2006)—is full of inventive music, played with enthusiasm, technical skill and a sense of humor.

Talking Cows was formed in 2004 by saxophonist Frans Vermeerssen and pianist Robert Jan Vermeulen, both established players on the Dutch scene. These two players share the bulk of the writing on this CD: Vermeerssen contributes five tunes to Vermeulen's three. The album also contains a cover of "Rollo II" by Dutch pianist Misha Mengelberg, whose stylistic influence is acknowledged by Vermeulen and whose sense of the absurd also impacts on the band's approach to the presentation of its music, especially in video form.

The tunes on Dairy Tales shift effortlessly between styles. On "Ruminating" the band starts out like a late-night lounge act until Vermeerssen's tone hardens and his upper-register playing produces squeals and squeaks from the saxophone and Vermeulen's piano chords start to show the influence of Thelonious Monk. Monk's impact on the pianist becomes even more obvious in the opening bars of Vermeulen's "The Virus," a bop tune driven by Yonga Sun's drums and Dion Nijland's double-bass. "Answered Prayers" is a slow march underpinned for most of the time by a funereal drum roll from Sun, while "Hellaluiah" is a smoky sax-led blues. The album ends with the splendid "Meantown," a short up-tempo track, with an extremely danceable beat and an R&B style sax part from Vermeerssen.

The album combines live and studio recordings, but the quality of the live recordings is so high that the only difference between the two is the sound of audience appreciation at the end of each live track. The quartet's ensemble playing is extremely strong and each member is a fine soloist. This is a group that has the skill to produce high quality jazz and the insight to realize that playing with humor is as important as playing with reverence. As a result Dairy Tales is a tongue-in-cheek, highly enjoyable, and beautifully-played album from a talented group.