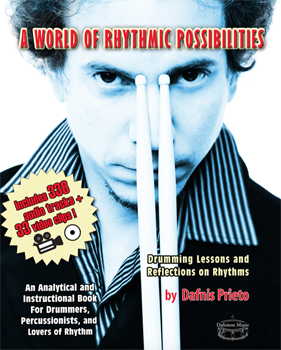 Learning to fluently and fluidly dissect, construct, and speak rhythms through the drums is a lifelong process of study, discovery, and growth. Touching on the new while truly expanding that coded language is incredibly difficult to do, and having the wherewithal and communicative skills to actually breakdown those expansions is as rare as can be. But clearly nobody bothered to tell that to drummer Dafnis Prieto. He does just that with his new drum instructional book—A World Of Rhythmic Possibilities.

The Cuban-born, New York-based drummer-composer has been setting stages aflame and turning heads through his association with a variety of major jazz figures since coming stateside just before the turn of the century. He's worked with the legendary Eddie Palmieri, laid the foundations for Latin modernists like Arturo O'Farrill, burrowed deep within the rhythmic layering of left-leaning heavy thinkers such as Steve Coleman and Henry Threadgill, and traded barbs with peers like Roman Filiu and the late Charles Flores. He's also delivered a half-dozen releases under his own name, touching on everything from expansive compositions for sextet to freestyle creations for voice, keyboards, and drums.

In each instance, Prieto's drumming has been articulate, distinctive, and unswerving in its progression through time. There's an unmistakable connection to tradition in the way he plays, but he's never been a slave to the past. Prieto manages to mutate and advance certain core theories, bending Latin rhythmic precepts to his will, and he creates something new in the process. Nobody else could manage to pull off what he does—he wasn't awarded the McCarthur Foundation's so-called "Genius Grant" for nothing—so it's with a certain amount of fanfare that this book arrives, making his rhythmic wisdom and wizardry available for all to see and study.

This hefty tome—at two hundred and seventy six pages, considerably longer than most drum instructional texts—is filled with musical examples and ideas on how to continue down the trails that Prieto has blazed. It's a tad on the wordy side, as drum books go, but that's truly a plus for those willing to take the time to digest Prieto's thoughts.

The entire book/manifesto is broken down into two sections, with five chapters in each. After a brief introduction, Prieto starts to probe a bit, dealing with the concept of sound and "Playing What We Want To Hear." Then it's off to the races. A discussion of cáscara, clave, and the relationship between the two ensues. Visual examples show how the various forms and permutations of both can line up and play with (and against) each other; Prieto shows how to simplify and spice up the core rhythmic patterns, all the while explaining how he arrived at certain ideas; and the meaning behind the title of this book becomes abundantly clear in the way rhythmic development is addressed.

From there, Prieto touches on his own experiences with George Lawrence Stone's indispensable Stick Control—a classic drum book that essentially focuses on technical growth through sticking variations. In applying Stone's concepts verbatim to bass drum and snare drum while furthering the difficulty by having the right hand play various patterns against it all, Prieto created some beastly exercises that serve to strengthen independence in limbs and mind. Then he goes several steps further, retaining the sticking patterns but changing and mixing the rhythms they're attached to. He basically shows us how the possibilities are endless.

Brief musings on tradition sit between the section on Stone's work and a detailed breakdown of Songo and where it can lead. Prieto marries strict ideas here with some room for improvisation, showing how patterns can be broken down, split apart, or used as the "call" in some call-and-response groove soloing. That wraps up the first section of the book, which by itself is more than enough to keep even the most advanced drummers out there busy for quite some time. So the question becomes: is the second half necessary? The answer: absolutely. If you want a full(er) picture of Prieto, a chance to delve into where Latin and jazz ideologies meet for him, and an opportunity to absorb some of his advice on the technique front, you must move into the second half of the book.

After visiting in on the spiritual and emotional connections with(in) music, Prieto draws a line between bop and clave by using two Max Roach drum breaks as material for his rhythmic lab work. A tasty snare and bass break from Charlie Parker's "Klact-Oveeseds-Tene" and the well-known "For Big Sid" lick become putty in Prieto's hands. In less than fifteen pages, he manages to open up doors that many may never have even found without his assistance.

More than fifty pages of pure technique exercises follow, with Prieto addressing one-hand-at-a-time work, delivering flam and accent examples, dealing with hand-to-hand independence, focusing on bass drum control, and bringing all the limbs together (and apart). Then the topic of rhythmic perception and awareness—illusion, displacement, architecture, and the like—fills the remaining pages, save for some standard book-closing features and a discography at the very end.

There's a tremendous amount to absorb and digest here, what with the length of the book and the inclusion of over three hundred audio tracks (and more than thirty video clips). But don't fear too much of a good thing. Prieto has created something unique that, while unconventional in length and organization, is a must-study for drummers in today's rhythmically diversified world.