By JEFF DAYTON-JOHNSON
April 25, 2012
Sign in to view read count 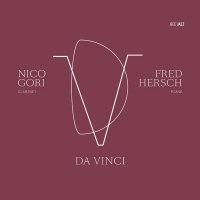 Clarinetist Nico Gori and pianist Fred Hersch both played the North Sea Jazz Festival in July 2010 and struck up a friendship riding together on the bus from the performance site to the hotel. Soon thereafter they began a series of duo gigs in Europe and New York. The studio recording Da Vinci captures the strong element of fellowship between the Italian and the American.

Gori is most visible as member of pianist Stefano Bollani's group. Hersch, meanwhile, has established a strong reputation for his solo playing, notably including the Grammy-nominated Alone At The Vanguard (Palmetto, 2011).

For Hersch, the album provides an opportunity to add another instrument to what would have undoubtedly been strong solo performances. Hersch's compositions heard here have the weighty inevitability of old chestnuts—it's hard to believe these are new songs. They sound like old European songs with classical resonances ("Da Vinci," "Mandevilla"), old blues ("Down Home"), or standards from the songbook ("At The Close Of The Day").

As such, the pairing of these two players is unlike the legendary 1950s pairing of white-hot John Coltrane and cool-blue Miles Davis (or indeed of Davis and Charlie Parker in the 1940s). Rather, Gori and Hersch exhibit, on this record, similar types of virtuosity: precise, florid and baroque with extraordinary control exercised over many moving parts. This is particularly true of Hersch's bravura solo on the opening, "Old Devil Moon," with its daring rhythmic forays, all kept ably aloft by the pianist, or of Gori's busily embroidered solo on "Doce De Coco." Da Vinci is, by and large, a meeting of hot with hot.

This "hot-hot" character extends through the set list. Most of the numbers here are mid-to- up-tempo performances, densely arranged and requiring a continuous virtuosity on the part of the players. Only on the wistful "At The Close Of The Day" (which would have been a marvelous vehicle for Bill Evans) and the Garner-esque "Hot House Flower" does the pace slow. Otherwise, the going is propulsive, and the mood is sunny.