Bill Heid: Da Girl: The B3 Artistry of Bill Heid 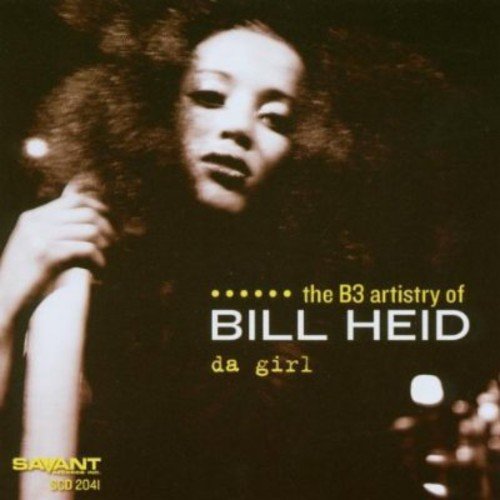 Da Girl is journeyman B3 jazz conceived and performed by one of the instrument's most stalwart components, Bill Heid. A fixture on the jazz/blues/soul scene for the past 30 years, Heid has had the opportunity to assimilate a myriad of styles and sounds. His two principal influences are Don Patterson and Larry Young. While also influenced by the ubiquitous Jimmy Smith, Heid largely avoids caricature and hero worship. Neither Mr. Heid's sound nor his approach can be considered retro. He plays a solid brand of 21st century hard bop that is guaranteed to please even the most jaundiced traditionalist.

is comprised of eight original Heid compositions that trace their way across several different subgenera. Saxophonist Scott Petersen and Trumpeter Joe Magnarelli heavily support Heid, resulting in a very modern organ jazz sound. To be sure, the band does employ tried and true formulas. The disc opener, "Soldiering On" possesses a typically complex hard bop head leading into angular solos by Petersen, Magnarelli, and Heid. Heid proves to be a master comper: never stepping on toes, but always rhythmically present. The title cut is a boogaloo recalling Lou Donaldson. The piece struts and sways through descending scales into a bluesy groove.

The blues! Yes, the blues are here and sound as fresh as that first cold beer on tap. "Peach Cobbler" is a soul jazz delight based on those same old chord changes that in Heid's hands sound brand new. "Sneaky Waltz" is a playful ballad in an inventive ï. "Blues for Margie" is a Sinatra-like ballad with an intriguing and compelling melody. Drummer Randy Gelespie heats things up on the boppish "Good Clean Fun." "Spirit of Newark" is the most Larry Young-Like of the compositions. "Eatin' and Boppin'" is the burner, starting as sprite soul jazz excursion before turning into a jazz blues clinic.

Bill Heid is very much a standard bearer for the old school B3 playing. He is a keeper of the flame not afraid to update the overall sound, but never at the expense of the Soul.