"That was like finishing school for me. In retrospect, it was very important for my development," he says. "She always challenged you. She always wanted me to think. Win people over with skill, not with gimmicks and tricks. She'd always say jazz is about finding out who you are. That takes work. I learned a lot from Betty. Not necessarily from what she said—she didn't say much to me. I learned most from just watching her. I was there night after night where she would sit in front of some audiences that she was well known to. Also with audiences who didn't have a clue who she was. And in less than five minutes, she would have them in the palm of her hand. It was amazing."

He adds, "Everybody that I come in contact with, you learn either what to do or what not to do."

In 1993, he signed with Atlantic Records, releasing the critically-acclaimed Revelation. His recording career has been steady, both as a sideman and on his own works like The Dark Before The Dawn, Earth Stories, and Genuine Chestnut.

Chestnut's career has put him in with some of the finest players of the day. His trio is a major focus, but he can be found in various other settings. Last year alone, he did gigs with a Kansas City Blues revue headed by singer Kevin Mahogany and at times sat in the piano chair of the Dizzy Gillespie all-star tribute band, as he did at the JVC Jazz Festival in Newport, Rhode Island. To each of those setting, he brings an uplifting sound and feel. His music, no matter how intense, seems to have an underlying simple soul. And his ballads are thoughtful and reach out to the listener.

"Billy Higgins sat me down one time and said, â"ËœYou've always got to be able to see the dancer.' Whatever music you play, I believe it's got to dance. Whether it's a waltz, swing, groove or whatever; 5/4, 8/4, 12/10, whatever meter, I believe the music must dance. I believe it must dance."

So Chestnut pushes on. He'll be playing Elvis music in 2008, but also other projects. "I just finished honing in this one show. It's called Sanctified Swing. I just recently presented it at the Kennedy Center. What it is, is jazz goes to church.

"It's been an interesting time. The legends who we've loved over the years are slipping away. It's hard to touch hands on them now. It's very sobering. The guard is changing so rapidly. I fight to keep a good outlook for the music, because I believe as long as the voice of freedom lives in the world, there will be jazz. You try to give honest performances and just keep working, keep working, keep working," he says, reflecting on today's music scene, not long after the death of Oscar Peterson.

"At this point in time, I just look forward to moving onward and upward. The legends I see, I can only imagine how they felt when they found out Bird had passed away. But they still had to keep going on. The torch keeps getting passed. The music must move forward. What direction it's moving, I can't tell you. But I know that it's moving."

He adds, "The horizon is very positive and I'm grateful for it. I'm just looking forward to more and more possibilities."

Cyrus Chestnut, You Are My Sunshine (Warner, 2003) 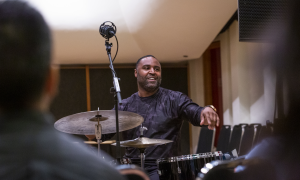