By DEREK TAYLOR
August 1, 2002
Sign in to view read count 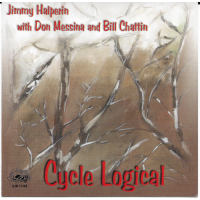 The Tristano School remains one of the most inexplicably under-utilized in modern jazz. Saddled unfairly with signifiers common to its more popular cousin the Cool school such as ‘overly-intellectual’ and ‘antiseptic,’ it’s a style commonly relegated to the fringes despite its undeniable influence on the music’s evolution. Endemic of these prejudices the number of surviving students who practice its tenets today are surprisingly few. Jimmy Halperin is among the number and wears the mantle proudly, but an even greater influence on the saxophonist’s playing manifests in two of Tristano’s earliest students- Warne Marsh and Sal Mosca. One of Halperin’s earliest session gigs was opposite Marsh in a quintet that also included the redoubtable bop pianist Barry Harris and drummer Albert “Tootie” Heath. While that date remains a consistently stimulating outing it necessarily featured Halperin in a supportive role under Marsh’s lead. This disc, Halperin’s second as a leader, suggests a far better barometer of his skills as an improvisor. Favoring the ‘chordless’ instrumentation of tenor, bass and drums Halperin and his partners, allow themselves maximum melodic freedom within the confines of each accommodating song structure.

The emancipation is apparent on the gorgeous opening reading of “Everything Happens To Me,” but really comes to play on the proceeding medley where Halperin opens the track unaccompanied. Swimming effortlessly and in almost scalar fashion through a stream of theme-derived notes his light tenor phrasings paint with Pollack-like splashes. The entrance of his partners signals a slightly more tensile turn to his tone through the appearance of lower register punctuations. Messina and Chattin favor a similarly abstemious approach moving from foreground to supportive roles with equal acumen. The bassist in particular, miked to near perfection, treats his strings as a streamlined vehicle for studious harmonic exploration while still retaining a playful and visceral flavor to his improvisations.


Another clever, if somewhat quixotic compositional combination crops up in the pairing of the timeless “Sweet Georgia Brown” with Halperin’s own enigmatically titled “Sub-Atomic Dominant.” The swift tempo pace makes for some treacherous harmonic terrain, but the three players scale the slippery ensemble sections without missing a beat. “Subconscious-Lee,” one of the standard currencies of Halperin’s chosen Tristano-bred lineage also opens up a wealth of improvisatory avenues and the trio charts a course that allows travel down many of them. While the music has admitted antecedents in the piano-less trios of Mulligan, Rollins and Coleman, the progenitor closest in countenance is actually Lee Konitz’s late Fifties ‘Motion’ trio with Sonny Dallas and Elvin Jones. If the work of that quietly trend-setting unit is to your liking than Halperin’s efforts are certain to please.