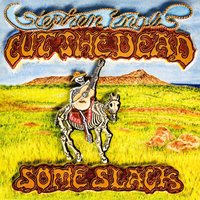 Guitarist/vocalist Stephen Inglis' take on the Grateful Dead, Cut The Dead Some Slack, constitutes a logical extension of that iconic band's idiosyncratic approach to making music. A more succinct approach than a two-CD set might've heightened the impact of this project, but regardless, the wide range of material this man chose highlights just how inspiring are these superlative songs (and some on-line resources label this package as a 'Deluxe Edition,' though it's not readily apparent if another version exists).

Inglis might better have rendered any number of tunes here strictly as instrumentals, from the opening of "Scarlet Begonias" to the predictable but nonetheless effective conclusion to compact disc one, "Brokedown Palace." That said, this album is not by any means merely a novelty item because it hearkens directly to the acoustic roots of a band that eventually transcended those influences on latter-day tunes like "Standing On The Moon. "

Bonus live tracks with a quintet anointed the 'Stephen Inglis Project' proffer a slightly more extemporaneous take than the thirteen roughly five-to ten-minute studio recordings that comprise the bulk of this title. That said, despite the well-intentioned and affectionate intent, the interactions of the namesake with the keyboardist Eric Petersen, bassist Jon Hawes and drummer Steve Howells plus guitarist/vocalist David Gans, don't quite leave the indelible imprint of Inglis' largely solo tracks (though do point up how unique is his approach).

The segue into "Lazy River Road" is merely an inkling of the spell Inglis can cast with his playing alone. Moving wordlessly from "Dark Star" to "Wharf Rat" then back again, becomes absolutely enrapturing in the way this guitarist using the Hawaiian 'slack key' technique of loosening the strings of the instrument to create more resonance. Meanwhile, his precise picking on the quick intro to "Cassidy" is mesmerizing; it's no real criticism of Stephen's voice to state that the phrasing of his singing, whether carefully enunciated on "Ripple" or tunefully intoned on "Bertha," is no match for his incisive playing, but only that his technique is so distinctive.

So, it's a wise move of engineer/co-producer Chris Lau's to highlight the musicianship in his stereo mix and thus preserve the spontaneity of the man's playing, even as overdubs are incorporated into the basic tracks, as described by Blair Jackson in his lengthy essay within the enclosed booklet. Inglis very often sounds like his interpretations are a means to rediscovery of the highly-nuanced beauty in songs like "Days Between," and he's able to highlight both the craft and the serendipity at the heart of such creations, much as he did with his homage to Bob Dylan, Slackin' On Dylan ('aumakua Records, 2010).

It's little wonder this bonafide gem of latter-day compositional collaboration between Jerry Garcia and lyricist Robert Hunter appears twice here, but that sensation of epiphany recurs so regularly during Cut The Dead Some Slack, the album beckons to both Deadheads and music lovers in general as an enlightening route to deeper comprehension and appreciation of this music's deceptively subtle attractions.