By GLENN ASTARITA
August 2, 2014
Sign in to view read count 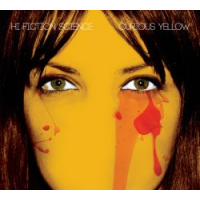 The band's second album is a melodic wonderland, especially on works such as "Circles in Halftone," featuring phased and psyched out connotations in unison with guitarist James McKeown's extended note, wah-wah licks. On "Curious Yellow," the musicians generate a sense of intrigue within a straight-four motif that is overlaid with choir-like pop vocals, echoing keys and a hummable melody line. The good news continues during "Fragmenting Song," where the frontline intertwines ambient electronics with Charles' animated lyricism, sketched on yet another memorably melodic hook. They translucently expand the proceedings into an upgrade of a 60s style pop tune, spiced with synth effects, and broadened by Matt Rich's heavy organ and Charles' chanting vocals atop a thriving rhythmic gait. Hence, the quintet even transforms conventional notions of all things Indie-Rock into a modern uplift. It's easy to deduce that great care and an unrelenting focus was enacted for this production. Curiously interesting, yet decidedly entertaining...